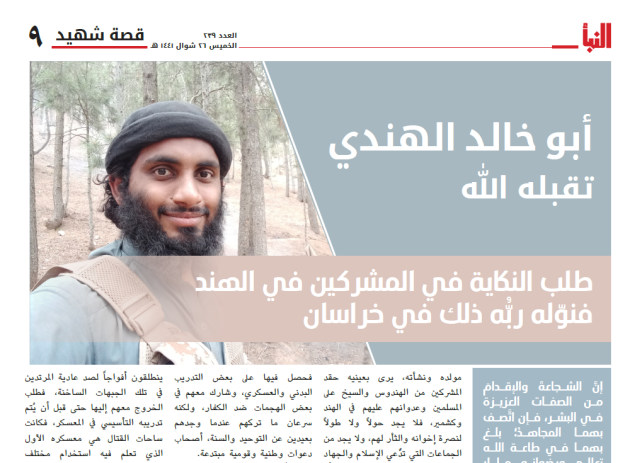 The Islamic State (IS) released the 239th edition of its newsletter, Al-Naba, on 18 June. Pages 9 and 10 of this twelve-page document were given over to a profile of Abu Khaled al-Hindi, the jihadist elsewhere named as Mohammad Sajid Kuthirummal who massacred twenty-five worshippers at a Sikh gurdwara or temple in Kabul three months ago, on 25 March 2020, during an hours-long siege. The details of Abu Khaled’s life—finding IS after being repelled by “nationalist” jihadist groups, fighting while injured, his obedience to IS’s leaders, and thirst for “martyrdom”—are relatively standard hagiography from IS. What is really worth noting is that such an extensive focus on him, and through him on Afghanistan, underlines the importance IS has placed on its Afghan branch, Wilayat Khorasan. END_OF_DOCUMENT_TOKEN_TO_BE_REPLACED 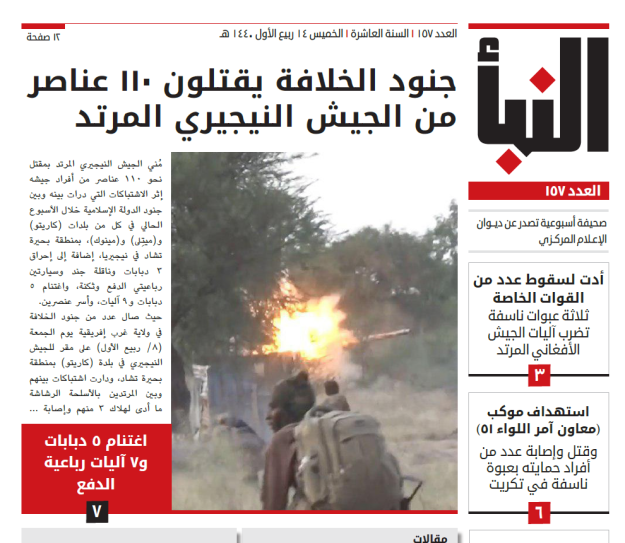 The Islamic State (IS) released the 157th edition of its newsletter, Al-Naba, on 22 November. The content was fairly standard, underlining IS’s ideology, particularly its belief that the current hardships are merely bumps on the road to a victory that has been pre-ordained by God. The bulk of the newsletter is devoted to the fierce insurgent campaign IS is waging in northern Iraq and parts of eastern Syria. END_OF_DOCUMENT_TOKEN_TO_BE_REPLACED

The New York Times reported on the growing closeness of relations between the governments in Iran and Russia, and the Taliban movement in Afghanistan, something that became especially salient earlier this year and which has been visible for at least two years. END_OF_DOCUMENT_TOKEN_TO_BE_REPLACED

The spokesman of the Islamic State (ISIS), Abu Muhammad al-Adnani, gave a speech today entitled, “Say, ‘Die in Your Rage’,” which is drawn from a Surah of the Qur’an [3:119]. The main announcement from Adnani is the acceptance of another wilayat (province), i.e. foreign branch of IS, this time in Afghanistan, led by Hafiz Saeed Khan, a former Tehrik-i-Taliban Pakistan (TTP) or “Pakistani Taliban” commander who broke away and formed a pro-ISIS faction in October. This follows the first declaration on this matter a month ago by IS’s caliph, Abu Bakr al-Baghdadi, which accepted “provinces” from Saudi Arabia, Yemen, Egypt, Libya, and Algeria. Adnani went on to make the foredoomed request that the Afghan jihadists “abandon disunity and factionalism” in order to join ISIS. END_OF_DOCUMENT_TOKEN_TO_BE_REPLACED