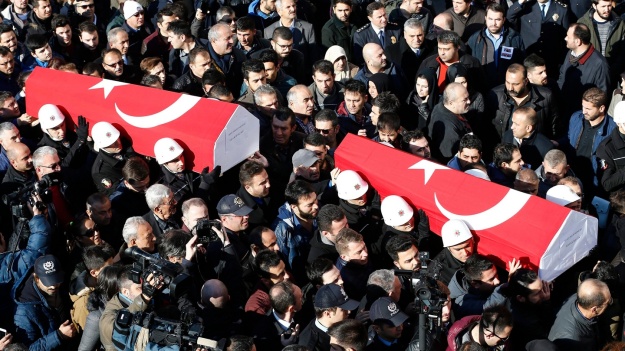 Funeral for the victims of the TAK/PKK terrorist attack on the Besiktas football stadium in Istanbul, December 2016. Photograph: Sedat Suna/EPA

The Kurdistan Workers’ Party (PKK), the separatist group in Turkey that is a designated terrorist organisation across much of the West, has always used a vast array of front-groups in the West to raise funds and recruit. After 9/11, with the advent of the War on Terror, the PKK switched tactics in the region to try to conceal its operations and avoid the “terrorism” label. This involved rebranding its operations in Iraq, Syria, and Iran, and setting up a special forces-style urban terrorism wing, the Kurdistan Freedom Falcons (TAK), to deniably carry out its most atrocious activities. The PKK’s rebranding has not been without success. In Australia, however, the government has refused to accept the PKK’s propaganda about TAK and lists it, quite correctly, as simply an alias for the PKK. END_OF_DOCUMENT_TOKEN_TO_BE_REPLACED 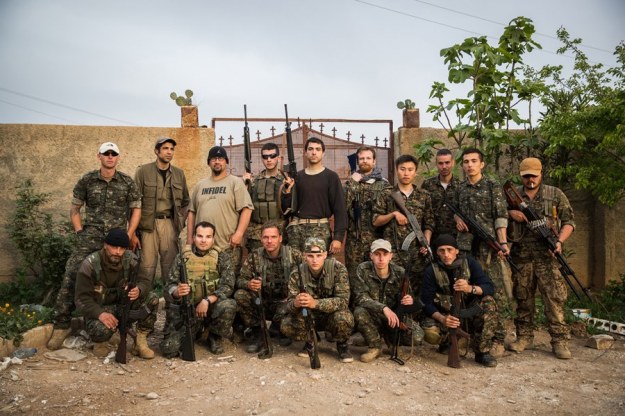 ABSTRACT: The Kurdistan Workers Party (PKK) operates under the names of the Democratic Union Party and the People’s Protection Units in Syria. The PKK is registered as a terrorist group by most Western governments, the European Union and Turkey, where it originated as a separatist organization. Nonetheless, the YPG has been the partner of the United States-led coalition in Syria against the ISIS. The strengthening of the YPG/PKK and its political messaging has brought in a flow of western foreign fighters. Some of these fighters are now returning to their homelands with indications that they are bringing security problems with them. 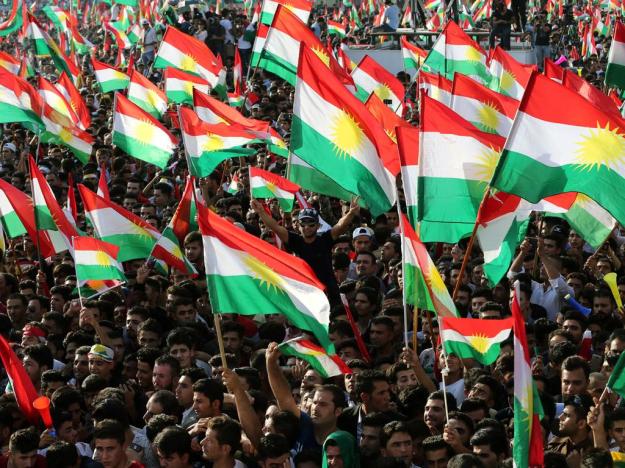 The Kurdistan Regional Government (KRG) held a referendum on 25 September, and voted overwhelmingly—with nearly 93% in favour—for independence. The comparison with Brexit might have been overworked by all sides, but there was a familiarity: while the result itself was not a shock, the fact of the referendum itself came as a surprise to many in what one might call the global elite, which lectured in that endearing way that had such success in deterring Brits a year ago. Then as now, the effect was, if anything, to stoke the bloody-mindedness of a population that had considerable qualms but had enough pride to repudiate being harangued in those accents. Still, as with Brexit, it wasn’t as if the naysayers didn’t have a case, and now comes the really difficult work. END_OF_DOCUMENT_TOKEN_TO_BE_REPLACED 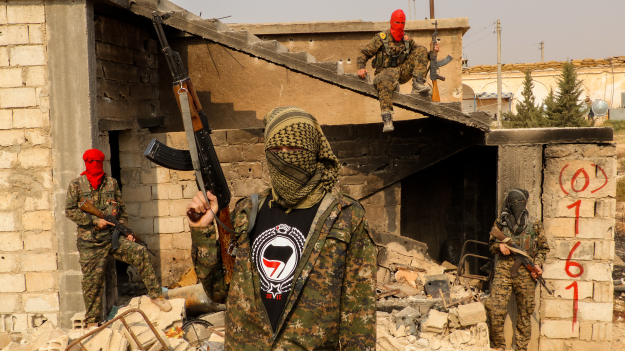 I released a report today, published by the Henry Jackson Society, The Forgotten Foreign Fighters: The PKK in Syria. END_OF_DOCUMENT_TOKEN_TO_BE_REPLACED

Aftermath of a TAK bombing in central Istanbul, Turkey, 7 June 2016

The Kurdistan Freedom Falcons (TAK) issued a threat against Turkey on Tuesday, at the very moment the U.S.-led Coalition was announcing the commencement of the operation to evict the Islamic State (IS) from its Syrian capital, Raqqa, in alliance with the TAK’s mother organization, the Kurdistan Workers’ Party (PKK). This underlines some of the challenges confronting the Coalition as a result of a half-decade of short-sighted counter-terrorism policy in Syria and a regional posture that tilted away from traditional allies. END_OF_DOCUMENT_TOKEN_TO_BE_REPLACED 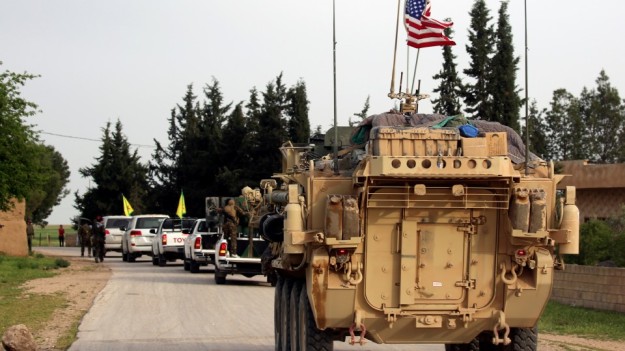 U.S. troops patrolling with the YPG/PKK in the village of Darbasiyah, northern Syria, on the border with Turkey, 28 April 2017

The United States has tried to engage in Syria almost solely in a counter-terrorism capacity, against Daesh (IS) and—in a recently-escalating campaign—against al Qaeda. The narrowness of the focus on jihadist terrorists led to the US disregarding wider political dynamics in the war in Syria—and to a degree in Iraq, too—and partnering with forces that over the long term will undo even this narrow mission.

The announcement yesterday that President Donald Trump will now arm the Kurdish People’s Protection Units (YPG) to expel Daesh from its Syrian capital, Raqqa, is the end-point of this policy, setting up a very dangerous medium- and long-term situation that will redound to the benefit of terrorists. END_OF_DOCUMENT_TOKEN_TO_BE_REPLACED 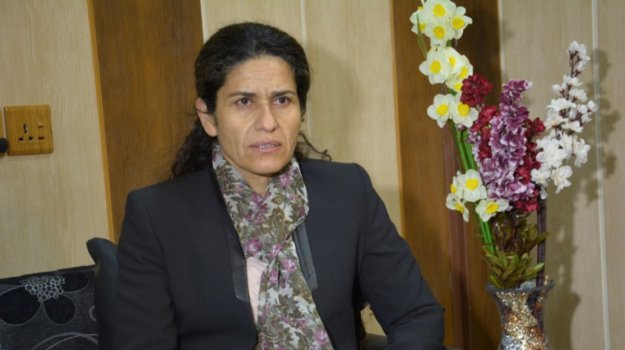 The West’s Syria policy is beginning to unravel of its own contradictions.

The Turkish government launched airstrikes against the positions of the Kurdistan Workers’ Party (PKK) in north-eastern Syria and the Sinjar area of north-western Iraq in the early hours of 25 April. There were international ramifications to this because the PKK in Syria, which operates politically under the name of the Democratic Union Party (PYD) and militarily as the People’s Defence Units (YPG), is the main partner of the U.S.-led Coalition against the Islamic State (IS). Turkey has protested the U.S. engaging the YPG/PKK so deeply and exclusively as its anti-IS partner, being displeased at the U.S.’s uncritical (public) stance toward the YPG, even after the YPG violated U.S.-brokered agreements on its operational theatres and used Russian airstrikes to attack Turkey- and CIA-backed rebels.

In response to Turkey’s anti-PKK operations this week, The Washington Post has hosted an op-ed by Ilham Ahmed, identified as “a co-president of the Democratic Council of Syria”. END_OF_DOCUMENT_TOKEN_TO_BE_REPLACED

Polat Can, 2014, head of the YPG’s information centre (source)

Over the last twenty-four hours, as fighting has escalated between Turkey and the Kurdish People’s Protection Units (YPG), the armed wing of the Democratic Union Party (PYD), in northern Syria, an YPG/PYD operative has taken to Twitter to protest. Polat Can is the YPG’s representative to the American-led international coalition ranged against the Islamic State (IS), and his missives have sought to inform the coalition who and what terrorism is, which can be broadly summarized as: the Turkish government. Can himself, however, might easily be considered a terrorist since he is an allegedly-former member of the Kurdistan Workers’ Party (PKK), a registered terrorist organization by the United States, European Union, and Turkey. END_OF_DOCUMENT_TOKEN_TO_BE_REPLACED