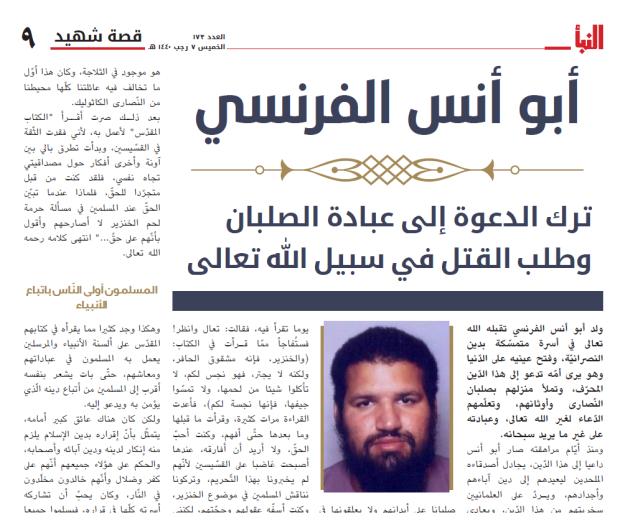 The U.S.-led Coalition against the Islamic State (IS) announced on 28 February that it had killed Fabien Clain (Abu Anas al-Firansi), a French citizen. Clain and his brother, Jean-Michel (Abu Uthman), were targeted by a Coalition airstrike in Baghuz, the final pocket of the “caliphate” in eastern Syria, on 20 February. It was unclear what happened to Jean-Michel, though the 173rd edition of IS’s newsletter, Al-Naba, published on 14 March, says (pp. 9-10) that he was killed a few days after Fabien.

WHAT WAS PREVIOUSLY KNOWN

According to the available information on Clain, he became involved with IS in the mid-2000s. Clain, a native of Réunion, a French island east of Madagascar in the Indian Ocean, came from a devout Catholic home. After moving to the French mainland, Clain and his brother converted to Islam. Clain then drifted into religious militancy and helped organise the movement of jihadists from France to Iraq to fight the coalition and the elected the government. Clain was convicted in France on terrorism offences in 2009. After his release from prison, Clain went to Syria around March 2015.

Within IS’s statelet, Clain was appointed to work for Amn al-Kharji, the branch of the security structure that brought together media and external terrorism: in practice the roles of propagandist-recruiter and terrorism guide are rather indistinct.

Clain’s hand was detected behind a number of the IS attacks in France and, after his infamous statement announcing IS’s responsibility for the November 2015 atrocities in Paris, attacks he clearly had foreknowledge of, he became known as a “voice of ISIS”.

Despite this elevated profile, Clain was not as high-ranking as other Frenchman in Amn al-Kharji, not just Abdelilah Himich (Abu Sulayman al-Firansi), who came to lead the department, but people like Salim Benghalem, who probably outranked Clain, too.

Clain was religious from early in his life, Al-Naba says, but he was a Catholic into his teens, when he would argue with atheist friends and try to get them to take up the faith.

When Clain read more deeply on his religion and discovered the injunction against idolatry, he made his mother remove all the icons and crosses from the house. As he read further, the distance between the text and the practice of Christianity in France, where the priests have “allowed them what God has forbidden”, became too much and he left Catholicism for Islam.

Al-Naba says the final straw for Clain was the discovery of the Biblical prohibition on pork. Having taken this to a priest, who dismissed the matter, Clain came to believe that Catholicism was a corrupted religion where the clerics hid from the believers what the true tenets of their faith and the demands of God were.

Clain showed the Bible passage to the family and they banished pork from the household, seeking to be “true” Christians who took instruction only from the written text of the Holy Book. Clain then came to believe that Muslim practices were closer to the Truth even of the Bible and began to feel closer to Islam.

The hesitation Clain had about converting was the realisation that it would change how he related to his friends and family; he would have to “consider them all unbelievers” destined for eternal suffering in Hellfire. But he did convert, along with two of his sisters, followed by the whole family, with his mother holding out for just a bit longer because she had spent three decades devoutly attached to Catholicism and was reluctant to believe her parents were damned in the hereafter. She came around, however, and soon stopped asking for forgiveness for her parents.

After converting to Islam, the Clains found that their neighbours did not react well to veiled women, so “did not hesitate” to move from Alonso (in the south-east of France, near Lyon) to Toulouse in the south-west, “where Muslims are common, there are many mosques, and the adherence (al-tizam) of women to the hijab is not strange”. Plus, it gave the family a chance for a fresh start with their new faith.

Clain took up da’wa (proselytisation) work, and gravitated to the most extreme form of Islam. He “abandoned the Tablighi [Jamaat], the apostate [Muslim] Brotherhood, the Murjias, and the [quietest Salafism of] the Madkhalis”, finding his way to “the people of tawhid (monotheism)” and the path of hijra (emigration to Muslim lands) and jihad.

Clain wanted to go to Yemen but could not, so settled on Egypt, where he went for two years to learn Arabic and more about the Qur’an. Upon his return to France he was arrested because some of his associates had gone to wage jihad in Iraq and others had been captured by Bashar al-Asad’s regime and handed over to France, which then moved against their networks. Imprisoned for five years, Clain continued working to convert people to Islam.

When he was released, Clain joined a university to try to increase his knowledge of the shari’a, Al-Naba says, but soon his brother, Jean-Michel, went to Syria and he wound up his activities in France and followed.

Clain was in contact with Jean-Michel after he entered the caliphate and Jean-Michel convinced Clain that pro-al-Qaeda jihadi clerics like Hani al-Siba’i (based in London) were lying about the Islamic State and conditions in its statelet. Al-Naba says that Clain’s mother came to him after Jean-Michel went to the “caliphate” and wept, fearing she was too old (63) and ill to get there. As it happened she was not and soon the whole family were in IS-ruled territory—Dar al-Islam, as Al-Naba puts it. 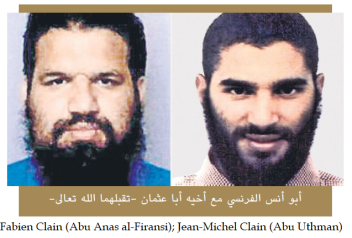 Clain worked for Al-Bayan radio and produced audio lectures and courses on the shari’a. Jean-Michel went to work for Ajnad Media Foundation (an institution perhaps best-known for producing the nasheeds, a competency the Clains had from their days as Catholic rappers). The Clains produced many widely-spread nasheeds and da’wa materials.