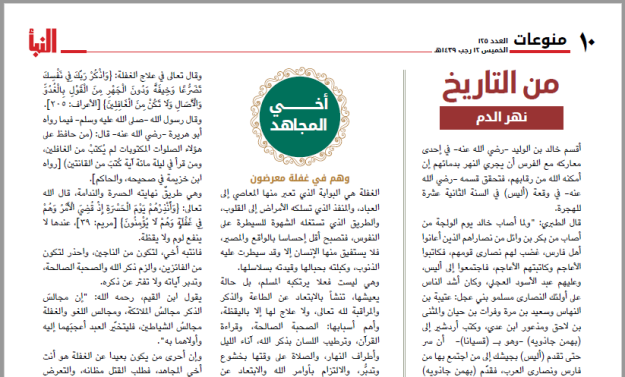 The 125th edition of Al-Naba, the Islamic State’s (IS) weekly newsletter, has an article on page 10, “From History: A River of Blood”, which relays a story that gives a good example of how IS uses Islamic historiography to justify its brutality.

The anecdote in Al-Naba relates to the battle of Ullays in May 633. The Prophet Muhammad had died in 632 and been succeeded as at the head of the Muslim Empire by Abu Bakr, the first of the four rashidun (rightly guided) caliphs. Abu Bakr began a series of conquests that expanded the Islamic realm—or, in terms of Islamic Tradition, removed the obstacles placed in the way of those who wanted to adopt the True Faith. The battle of Ullays was between the Muslim forces, led by Khalid ibn al-Waleed, a companion of the prophet’s, and the Sassanid Empire, centred in Iran and ruled over by Persians, with territories occupied by Arab allies in what is now Iraq, where the Ullays battle took place.

Al-Waleed’s caliphate army was considerably smaller than the Sassanid forces, so he “swore … that a river would be made with [the Persians’] blood if God granted him victory, and he verified this oath on their necks … in the twelfth year (hijri)”, as Al-Naba puts it. Al-Naba then quotes from Tafsir al-Tabari and Ismail ibn Katheer about events. Al-Waleed killed numerous captives (up to 70,000, according to Al-Naba’s rendition), beheading many of them, but found that the blood-flow was insufficient to create a river. The solution al-Waleed found was to divert water from elsewhere to flow over the mutilated bodies and created a river of bloodied water. “This is the story of the river that was made with the blood of al-majus (the Magi [Zoroastrians])”, Al-Naba concludes. “We ask God to reward their renegade descendants with something like this.”

Al-Waleed’s standing in Islamic history is unassailable, known as Sayfullah al-Maslul (The Drawn/Unleashed/Unsheathed Sword of God). As Michel Weiss and Hassan Hassan note in their book, ISIS: Inside the Army of Terror (2015), this kind of anecdote has two purposes for IS.

First, dredging up such obscure precedents enables the sense of in-group access to secret knowledge that is so conducive to creating cults that believe they are on a righteous mission, despite near-universal opprobrium. “[M]any ISIS members interviewed for this book were eager to emphasize that they were stirred by such recondite teachings—it made them feel like part of a priesthood, a secret society—and were drawn to the way ISIS presents Islam with absolute clarity”, the authors note.

Second and related, it grounds IS theologically, allowing them to claim that everyone is out of step but it. “ISIS repurposes this story to justify the murder of captives”, Weiss and Hassan writes, “because surely the military commander deemed by the Prophet himself as the ‘Unleashed Sword of God,’ and hailed for his martial prowess by the first Muslim caliph, Abu Bakr, cannot be a heretic.”

This latter point was emphasized on the only other occasion that the post-Ullays story has appeared in official IS output, on 4 October 2016 on page 25 of the second edition of Rumiya (Rome), an English-language IS propaganda magazine that replaced Dabiq in preparation for the jihadists losing the village itself in northern Syria to Turkey and allied Syrian rebel forces.

What IS wrote in Rumiya was:

[I]n the Battle of Ullays (a village of Anbar) with the Magian Persians, the Unsheathed Sword of Allah swore that the river would run with their blood. Ibn Kathir said, “Khalid said, ‘O Allah! You have my pledge that, if You grant me victory over them, I will not leave any of them alive until I make their river run with their blood.’ Thereafter, Allah granted the Muslims victory over them. Khalid’s herald called out, ‘Capture them! Capture them! Do not kill anyone but those who refuse to be captured!’ So the captives were driven like cattle, and Khalid appointed some men to strike their necks by the river. This lasted for three days. Anyone who was brought had his neck struck by the river. The water kept flowing, but the blood settled. So one of the commanders said, ‘The river will not run with their blood until you force the water to the blood, so that the blood will flow with it and you will have kept your oath.’ So they forced the water towards the blood and the river flowed as if it were pure blood. That is why it is called the River of Blood to this day … And the number of those killed was seventy thousand.” …

What we have mentioned here of stories is only a small sample of the manner in which the Sahabah [companions of the Prophet] dealt with the kuffar [disbelievers] and the murtaddin [apostates] during their wars with them. Whoever wishes to follow them will be guided and saved. And whoever wants to follow another path, then Allah will leave him to what he chose of deviant methodologies and deviating sects. And whoever claims to be more guided than the Sahabah, then he has belied Allah and His Messenger, and Allah alone guides to the right way.

Though the story has only appeared twice in IS’s messaging output, it was in wide circulation as part of the indoctrination and training programs at the camps under IS’s “caliphate”. The story and others like it helped new recruits overcome their resistance to murder by giving them a theological justification for what IS had ordered. This is at variance with most mainstream Muslim clerics, who either try to contextualize these events—which is more complicated and can sound irresolute, especially to young men—or they simply ignore these events altogether. This left IS to present itself as better-informed and/or more willing than the mainstream clerics to follow the “pure” Islam as laid down by a simple, consistent reading of the texts, and left recruits to come away from the IS camps “feeling that they have stumbled on the true message of Islam”.