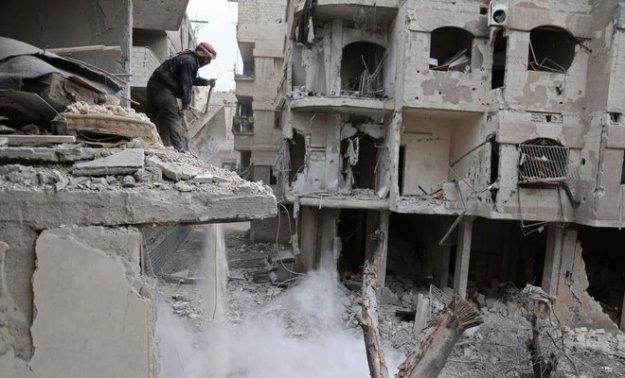 Aftermath of a pro-Asad coalition bombing in Hamouria, in besieged Eastern Ghuta, near Damascus, 22 February 2018. (AFP)

In the summer and autumn of 2017, it was claimed Syria’s civil war was winding down, but the nearly seven-year conflict is nowhere near to finished, and recent events suggest it could even escalate.

Firstly, the Astana process was begun involving Russia, Iran, and Turkey. Ostensibly focused on reducing violence, the proposed “de-escalation zones” — like prior “freezes”, “cessations of hostilities”, and ceasefires — were used to sequence Assad’s war, and Russia attempted, with some success, to use these facts-on-the-ground for the “Astana-isation” of the internationally recognised peace process in Geneva, altering the terms to suit Assad.

Secondly, after long effectively ignoring the Islamic State (ISIS) — indeed ISIS gained territory during the early part of Russia’s intervention in Syria, which overwhelmingly targeted the mainstream armed opposition — the pro-Assad forces began a concerted campaign into ISIS-held areas in early 2017. By fighting a globally detested terrorist organisation, it was hoped Assad would gain international legitimacy and enough momentum and territory to be seen as the inevitable victor.

At the end of 2017, foreign powers dominated in Syria as never before. Turkey worked through opposition groups, in a model similar to its Euphrates Shield zone in northern Aleppo, to extend its influence via “observation posts” in Idlib. In western Syria, Assad formally reigned while Iran and Russia ruled. To the south, Jordan had largely ceded handling of the rebel groups there to Israel, which was trying to use them to push Iran’s militias away from its border. And the United States had a protectorate in all-but name in northeastern Syria through the YPG.

The result of the joint focus by the pro-Assad forces and the U.S.-led coalition was that much of the underlying Syrian war was paused throughout the year, and the various zones of influence largely avoided clashes with one another. Some mistook this fragile truce for a resolution. In fact, with ISIS’s “caliphate” gone, the war everybody except the United States had been fighting — the war for regional order — recommenced with such ferocity that even Washington could not avoid being partially drawn in.

Read the rest at Ahval