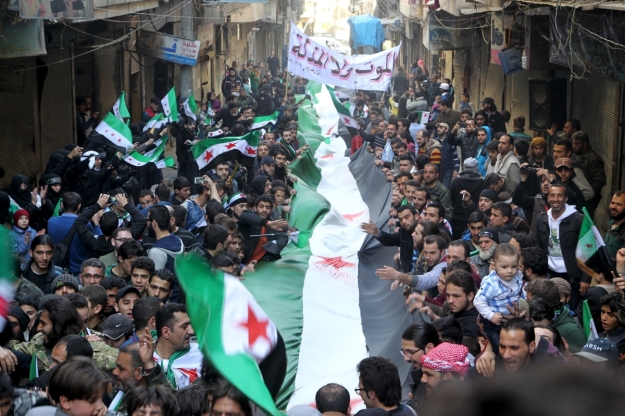 A recording was leaked on 28 November of a Syrian cleric, Abdul Halim al-Atwan, giving a lecture to Syrians in Idlib, condemning the current leader of Hay’at Tahrir al-Sham (HTS), the descendant of al-Qaeda’s Syrian branch Jabhat al-Nusra, for having distorted and destroyed the Syrian rebellion by infecting it with extremism and intra-insurgent fighting. Al-Atwan, the uncle of HTS leading shar’i Abdurraheem Atun (Abu Abdallah al-Shami), notes that al-Nusra intruded into Syria as a wing of the Islamic State in 2011. This is only a small demonstration of the continued resistance among Syria’s armed opposition to being co-opted by the HTS jihadists.

Al-Atwan was a member of HTS after its announcement in February, but left in March 2017. In his resignation notification, al-Atwan said it was haram (forbidden) to join HTS, though he was simultaneously very critical of Ahrar al-Sham.

In his November statement, al-Atwan says:

Okay. The Khawarij and the extremists. Represented by whom? The Dawaesh. Who else? A part of [Jabhat] al-Nusra. A part of al-Hay’at and al-Nusra.

Oh youths, the day Jabhat al-Nusra was formed, [its leader, Ahmad al-Shara, better known as Abu Muhammad] al-Jolani had a bay’a [pledge of allegiance] on his neck to [Ibrahim al-Badri, the so-called caliph of the Islamic State, Abu Bakr] al-Baghdadi, making al-Baghdadi the emir of al-Jolani. There is no doubt about this; this is a fact.

The son of my brother, Abdurraheem [Atun], has on his neck a bay’a to al-Baghdadi through [the late spokesman of the Islamic State, Taha Falaha, a.k.a. Abu Muhammad] al-Adnani.

Let them try to refute these words. The son of my brother, Abdurraheem Atun, he has a bay’a to al-Baghdadi, and through whom? Through al-Adnani.

Exactly two weeks before, Syrian opposition activists produced a video, documenting eleven rebel groups that al-Nusra/HTS has attacked and/or destroyed, which include some of the most formidable units, as well as those that were most attractive to international actors looking to assist the rebel cause.

The eleven groups were:

The list could also have included Kataib al-Safwa al-Islamiyya, Division Thirteen, and a number of others.

The above is a partial demonstration that, in political terms, there has probably never been so much rebel antagonism toward HTS. Alongside this in the “Greater Idlib” area, as Haid Haid explained recently, a civil society continues to exist, a daily act of resistance to HTS’s attempts to subsume a rebellion against autocracy into its dark program for theocracy and tyranny. With Turkey’s intervention in Idlib, there is the potential to weaponize this discontent.

However, the broader dynamic of a de facto acceptance by the “international community” that Bashar al-Asad, propped up by Iran’s Shi’a jihadists and sectarian militias, will remain in Syria, leaves the anti-regime struggle in the hands of al-Qaeda and its offshoots, a lifeline they are only too aware of. The expulsion of the Islamic State from most of eastern Syria and the attempt to replace it with the Kurdistan Workers’ Party (PKK), which might yet result in the return of the regime, is also providing new opportunities for HTS and other Islamist militants in areas that were previously inaccessible to them.

Many thanks to “Ibn Nabih” for help with al-Atwan’s profile. Post has been updated.