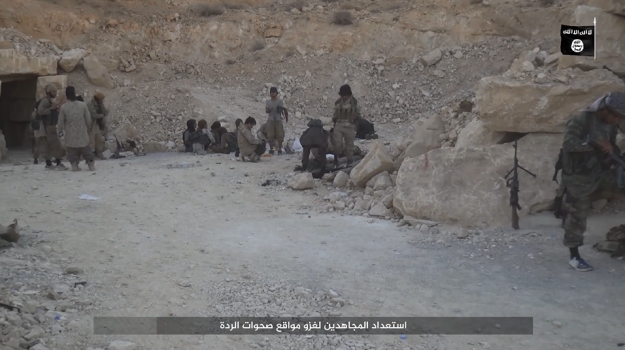 The U.S.-led international coalition launched airstrikes into eastern Syria on 4 September 2017 that killed “two senior ISIS leaders” involved in “weapons engineering activities” and the external operations wing of the Islamic State (IS or ISIS), according to a statement from U.S. Central Command (CENTCOM) yesterday.

One of the slain was named as Abu Anas al-Shami. (This kunya was once used by Umar Yusef al-Juma, a jihadi cleric of Palestinian origins born in Kuwait, who served as the first deputy to the IS movement’s founder, Ahmad al-Khalayleh, the infamous Abu Musab al-Zarqawi, after he entered Iraq in 2002.) The Abu Anas killed on Monday was an “ISIS weapons research leader” who “led ISIS’s attempts to procure explosives, and devised plans to use bombs for external terror attacks”. This likely means Abu Anas was an amni, a member of the IS security services, specifically the foreign intelligence branch, Amn al-Kharji, that has orchestrated the wave of international terrorism. CENTCOM adds that Abu Anas “oversaw the building of improvised explosives to rig corpses, vehicles, and buildings against local forces and civilians to inflict terror, death, and destruction”. These left-behind IEDs and booby-traps have inflicted some of the heaviest casualties on the so-called Syrian Democratic Forces (SDF), the coalition’s partner force for the Raqqa operation.

The other IS jihadist killed was Junaid ur-Rehman (also transliterated as Junaid al-Rahman), “a senior ISIS drone pilot trainer and engineer”, who was “an experienced engineer … working to increase ISIS’s ability to weaponize drones and to conduct aerial surveillance on the battlefield and plot attacks throughout the world”. Like Abu Anas, this presumably means al-Rahman was an amni.

It is notable that Abu Anas was struck down “near” al-Mayadeen, and al-Rahman was killed in the village of al-Ashara, south of Mayadeen. Successive recent statements from CENTCOM have documented seventeen IS operatives, at a minimum, who have fallen to targeted elimination strikes in or around Mayadeen this year.

Abdurakhmon Uzbeki, a “close associate” of the caliph’s and a facilitator of the Reina nightclub atrocity in Turkey on New Year’s Day, fell to a coalition strike on 6 April. On 16 April, the coalition killed Abu Ali al-Janubi, “ISIS’s senior media director”. A Turkish facilitator for attacks outside the caliphate, including in the West, Mustafa Gunes, was killed on 27 April. Abu Asim al-Jazaeri, a French-Algerian, was indoctrinating the next generation of IS via the “Cubs of Caliphate” program when the coalition killed him on 11 May. Orhan Ramadani, “responsible for actively planning external terror attacks”, was cut down on 21 May. Baraa Kadek (Riyan Meshal), the founder of Amaq, was killed between 25 and 27 May. Days later, on 31 May, IS’s most visible religious authority, Turki al-Binali, was killed. On 7 June, in separate operations, the coalition killed Samir Idris, one of the key finance emirs for external terrorism, and Lavdrim Muhaxheri (Abu Abdullah al-Kosova), the leader of the Albanian jihadists within IS. Razim Kastrati, an “ISIS external terror attack coordinator” and trainer of Balkan jihadists, was killed with five other IS operatives in a 16 June airstrike. Abu Futtum, an “ISIS explosives specialist”, was removed on 13 July. And one of IS’s funders for the foreign attacks, Bassam al-Jayfus, was killed on 18 July.

Beyond Mayadeen specifically, at least thirteen IS leaders have been killed in the area spanning the Iraq-Syria border that IS calls Wilayat al-Furat.

Ibrahim al-Ansari, an “ISIS propaganda official”, was killed on 25 March in al-Qaim, the Iraqi border town that has been a gateway for IS to move from its Asad regime-protected sanctuaries in Syria into Iraq for fifteen years. Also in al-Qaim: on 27 April, Abu-Sayf al-Isawi, “an ISIS media emir”, was killed by the coalition; and on 18 May a “senior ISIS military official” who “provided direct support to ISIS leadership”, Abu-Khattab al-Rawi, was killed with “three other terrorists”. Abu Khattab likely worked in some coordination with Junaid al-Rahman since he had been “responsible for coordinating UAV operations and procurement in al-Anbar Province in Iraq”. Muhaxheri’s “deputy”, Irfan Hafiqi, also an ethnic Albanian, who recruited from southeast Europe and engaged in plotting foreign attacks, was killed on the same day as his boss, 7 June, a short distance away near Qayira. Abu Hammam, involved in external operations, and three other IS members were killed by a Coalition airstrike on 16 July near Deir Ezzor city, which has become a focal point this week after the Iranian-led pro-Asad forces appeared to break the three-year siege imposed on the provincial capital on 5 September. Abu Hammam was the “assistant” to Abd al-Ghafur, an “external operations official”, who was, with an associate, eliminated on 24 July in an airstrike near al-Bukamal, the town directly opposite al-Qaim on the other side of the border.

Al-Mayadeen, in the Deir Ezzor Province in eastern Syria, down the Euphrates River Valley from Raqqa, IS’s supposed Syrian “capital”, has been home to much of IS’s administrative infrastructure since February. Some have called Wilayat al-Furat IS’s “third capital”. The concentration of IS’s leadership eliminated in that zone would seem to vindicate that analysis. IS has made a show of force in Raqqa to inflict enough of a penalty on the incoming forces for honour’s sake, but it is not the all-out defence that was seen in Mosul. The last stand will be made further downriver, on the terrain IS knows best, which sheltered it during the wilderness years after 2008.