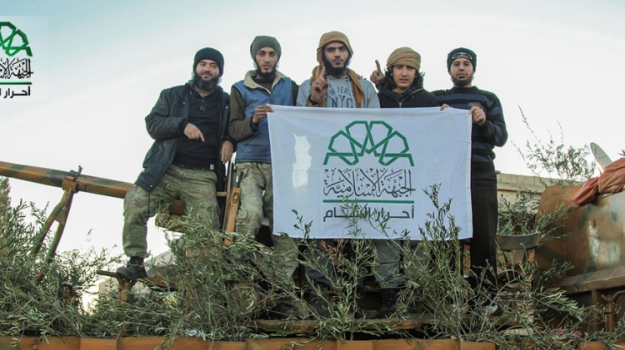 In the past few days, news has circulated of an impending merger between the rebranded al-Qaeda branch in Syria Jabhat Fatah al-Sham (JFS) and several rebel groups, Ahrar al-Sham and Harakat Nooradeen al-Zengi among them. Labib al-Nahhas (Abu Ezzeddine al-Ansari) is the leader of the Political and External Affairs bureau within Ahrar al-Sham. In mid-to-late 2015, al-Nahhas led an effort to recast Ahrar as a mainstream actor in the insurgency that was in any case too large to avoid engaging, a characterization of the organization that is, to say the least, open to challenge. Al-Nahhas is sincerely opposed to Ahrar merging with JFS, however, for the simple reason that he can see it is political suicide: it is the end of any degree (and there hasn’t been much as it is) of Western support for the Syrian armed opposition; once the insurgency is formally attached to al-Qaeda, the only question will be the extent of the Western support for efforts to put it down.

On 26 December 2016, Labib al-Nahhas sent a series of seventeen tweets, which were disseminated by Ahrar al-Sham’s English-language Twitter account, on the problems with the proposed merger, reproduced below. For the sake of clarity, I have written it without the numbering, corrected some of the syntax, and put it into sentences (e.g. “r” becomes “are” and “rev.” becomes “revolution”.)

The revolution is at a crossroads. The factions’ decisions in the coming days will determine if we are on the road to salvation or perdition. Just a small error could finish the whole experiment.

There are plots in secret to destroy the arena and to target those who reject the merger, which was designed to the advantage of some parties. Short-sightedness and ambition are pushing toward some destructive options. The choices are presented as an ideological project or sharp polarization [between the insurgent groups], when in fact there are broader options.

Some of the parties are busy achieving their project at any cost, which made them move toward dangerous, suicidal alliances. There are those who believe they are able to ride the tiger. The re-entry of Da’ash [Islamic State] elements into Idlib would have catastrophic results if the factions, including Fatah al-Sham [JFS] didn’t move [against it].1

Proper merging is not build on secret agreements, threats, and bullying, and it does not cause an increase in the isolation of the revolution. Rather, [a true merger] is built on genuine popular support.

Proper merging is not built on fatwas from clerics who threaten divine punishment and forbidding those who refuse [entry to] paradise. There is no priesthood in Islam.2

Proper merging doesn’t disable operations rooms and damage the entire theatre to force submission to others. What is built on blackmail has no blessing in it.

The rebels are not playing cards in the hands of their leaders; their sacrifices are for the sake of god and the people, so stop abusing them.

The exploiters asked the politicians to work to get them out but they refused to sign a  document in order to keep their purity. This was cheap and had no dignity; as the politicians worked to save tens of thousands of lives in Aleppo, they [the exploiters] were some of the first to retreat.

Syria is not Iraq or Egypt and these psychically damaged and frustrated muhajireen (immigrants, foreign fighters) are a disgrace and helped lead to the destruction of the country.

While Aleppo was being demolished, others were in the bazaars, haggling over the leadership and positioning themselves to dominate the arena. Aleppo revealed that the battle needs include tools other than military ones, a fact others have been denigrated for noting.

Unity is the aim of everyone but not at any price. Deliberation does not mean disruption, it means taking account of the mistakes of the past and reading [the situation and consequences] accurately, rather than deciding using emotions.

A merger of the Islamic Front failed despite the great convergence between everyone and the fraternal relations and advantageous situation because it was saturated with contradictions. Unity in this way [again] would be catastrophic to both the revolution and the Syrians.

A further set of statements by Labib al-Nahhas were collected in an infographic (see below) and disseminated by Ahrar al-Sham’s Telegram and other accounts on 29 December 2016. Where the last message explained al-Nahhas’ objections to the proposed merger, in this message al-Nahhas offers a vision of what insurgent unity should look like. Reproduced below, I have omitted the numbered bullets and occasionally corrected grammar and syntax.

The unity we need comes by uniting the whole [insurgency] in one body that represents the Syrian people’s revolution and ends the state of disunity, rather than creating more polarization.

The unity we need is able to launch a national project to protect the Islamic and Arab identity of Syria and combines the arena [theatre] to end the regime and liberate Syria.

The unity we need does not ignore the multiplicity of thoughts, but establishes the principles and the framework for action to be absorbed, and unifies to fight extremism and negligence.

The unity we need does not destroy or ignore the intellectual or partisan projects, but delays them until the objectives of the revolution have been achieved.

The unity we need unites the arena internally and staves off external evils of extremism and negligence.

The unity we need stems from the legitimacy that honestly reflects the intellectual diversity in our society, and has a high degree of jurisprudence of reality.

The unity we need emerges around a central, unified military command that manages the arena strategically, covers the entire Syrian territory, and reconquers areas for the revolution.

The unity we need emerges around a political leadership that is able to put a conscious speech, fights politically, and reaps the benefits of opportunities and contradictions.

The unity we need gives priority to alleviating the suffering of our people, emphasizes enabling civil administration of their own affairs, and ensures ways of support and protection.

The unity we need founds a unified, legitimate system of checkpoints and a unified free police force.

The unity we need will not be done by “overcoming policy [differences]” but by eliminating the Ba’athist policy that still dominates the behaviour of many.

The unity we need houses and accommodates everyone without exclusion, and does not need a safety valve as its safety is held by everyone.

The unity we need requires serious steps from Fatah al-Sham and requires that other factions help them do so.

The unity we need may not be integrated, but the model starts from military work, with a firm leadership, so lets focus on goals, not means.

The unity we need should [not be] an excuse to delay military operations and the factions’ duty towards our people in the besieged areas.

The unity we need is possible and needed, but needs more time and wisdom. Reality does not wait, however, and we must act militarily in parallel with [working towards] unity.

[1] The reference here is likely to Jund al-Aqsa, which has been accused of being both infiltrated by the Islamic State and harbouring Islamic State cells that then conducted assassinations against rebels and JFS in Idlib. Since Jund al-Aqsa is now part of JFS—merging for protection after Ahrar effectively declared war on Jund al-Aqsa—this is a barb against JFS.

[2] JFS has orchestrated a campaign of clerical pressure against Ahrar al-Sham to try to press it into a merger. A notable leader of this is Abdallah al-Muhaysini, ostensibly an independent figure who is in reality very close to JFS’s leadership.