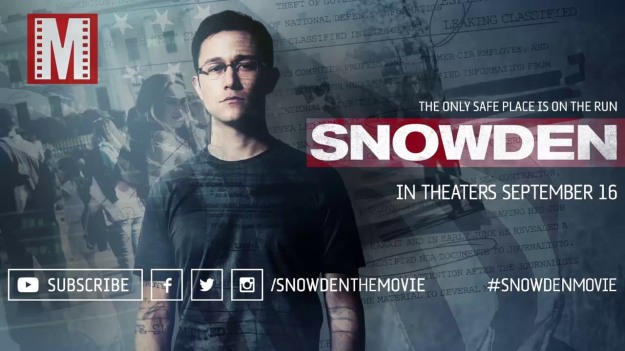 Snowden never, ever recovers from its premise: that Edward Snowden, a super-capable, pure-hearted all-American, found terrible government crimes against the American population while working at the National Security Agency, and was moved to disclose them to the world after being stymied in official channels.

Literally none of that is true. The Snowden revelations found mistakes that were generally cleared up by an efficient and functional bureaucratic oversight mechanism. Snowden did not try to go official channels in the way he described, and the bulk of what Snowden revealed was nothing to do with the privacy of Americans but was related to foreign intelligence, where the legal and practical situation is that everyone hoovers up as much data as they can. The capabilities of the Snowden presented here, personal and professional—to say nothing of Joseph Gordon-Levitt’s Snowden’s motives—would not withstand scrutiny for a single second against the actual historical record. This could be said fairly generally of the whole film.

To give two examples of the mendacity of the film.

First, the FISA court is portrayed as a toothless “rubber stamp” (that’s the phrase used) body that just waves through any NSA request to spy on citizens. This is a point Glenn Greenwald (played here by Zachary Quinto) made in the film Citizenfour (2014), which might be thought of as the documentary version of this film. The simple truth is that the NSA vets its applications: it does not apply when it knows it is likely to be turned down and only applies when it has a good case—hence the number of refusals from the FISA court are low.

Second, Snowden is given a convoluted reason to move to Hawaii in March 2013, where he became a systems administrator for NSA contractor Booz Allen. Snowden in the film and in one of his many contradictory versions of how this went down claimed that he was moved to leak by the testimony of James Clapper, the director of national intelligence, to Congress on 13 March 2013. In reality, by this time, Snowden is already in contact with Greenwald and the other activists who would later use the information Snowden stole for the most sustained and devastating assault on the intelligence system of the Western Alliance. Snowden, by his own admission, took the Booz Allen job with the specific intent of stealing documents that filled in gaps in the information he had already begun stealing in late 2012 and which he offered to Greenwald—who initially ignored his approach—in December 2012.

The Snowden-as-super-spy and super-patriot threads are alternately flatly false and nauseating. Snowden was good at what he did, which was help keep the technical side of America’s signals intelligence system operative. But Snowden was not an intelligence officer, did not understand the overwhelming majority of what he stole, and had not read the documents. The question of Snowden’s patriotism is where the film shows what it is really about.

As a simple artistic matter the film is not all that it might be; it does better than The Fifth Estate (2013), which even with an all-star cast and every effort could not make Julian Assange’s cyber-piracy into an interesting or relatable movie. But the film chooses to flip backward and forward between the time Snowden is being led (apparently without volition) toward treason and the moment after he has gone to Hong Kong to orchestrate the first releases of the stories based in the purloined material in June 2013. Noticeably, the film does not properly, as was once said, explain how we got from the one state of affairs to the other. If people are not familiar with the story, I can imagine it would be difficult to keep up. And that appears to be the point. Director Oliver Stone clearly wished to keep out of the Snowden story a fact so large it punches a hole in his screenplay: the role of Russia.

Snowden managed to disappear for eleven entire days once he got to Hong Kong, at least one them spent with Russian intelligence officers under diplomatic cover at Moscow’s consulate, and Snowden moved from Hong Kong to Russia. Contrary to the narrative spun by Snowden and his defenders, this had nothing to do with America revoking his passport: Snowden was always headed for Russia because he acted on instructions from WikiLeaks, who had a minder with him from the moment he landed in Hong Kong. WikiLeaks is, as some people have been pointing out for years, and as became blatantly obvious during the recent U.S. election, a front for Russian intelligence. Snowden is still in Russia, where and doing what we are not quite sure, though we can be certain that Russia’s powerful FSB has control of the situation—not least because they have as good as told us so. None of this is included in the film.

Stone’s decision, therefore, to cut the film off at the moment when Snowden is still in Hong Kong is no accident, as the comrades used to say. Added to this, the omissions and outright misrepresentations of Snowden’s behaviour at work, which included securing two-dozen passwords and other activity that properly falls under the heading of tradecraft rather than whistleblowing, and to even conceal what Snowden really did once landing in Hong Kong is to betray a bias whose origins are perfectly clear. Stone has been helping peddle Moscow’s disinformation for decades.

Philip Agee is basically the pre-internet Snowden. A CIA defector to the Soviet Union in the 1970s, Agee spearheaded a Soviet active measures campaign against U.S. intelligence. Agee always denied he had any link at all to the East; now it is simply a matter of record that he was a KGB agent (his codename was PONT) and the books that went out under his name, revealing U.S. secrets that led to the death of the CIA station chief in Greece, were written by Moscow Centre and the secret police of the recently-departed Fidel Castro.

One day, we will know when it was that Snowden placed himself in, or was drawn into, the Kremlin’s hands. Until then, that is the interesting question left over from the Snowden episode. Snowden himself is not interesting; the only complexity is the mix of insecurity and avarice that led him into treason. And the “debate” one is often invited to have about Snowden’s revelations—relating to privacy and the limits of state power in the West—has long since been superseded by the real lesson of the Snowden saga: the need for better Western security in the face of hostile foreign dictatorships.