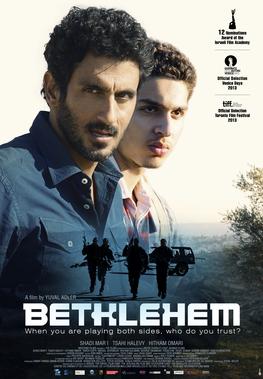 Bethlehem is one of the most compelling films I’ve seen in a long time. There are so few good spy films available that this is a welcome surprise. Unlike Burn After Reading, a genius film, the intention here is not to show things from the agency side, to demonstrate how wildly out of control things can get when you only have half-or-less of the facts. It is also not Charlie Wilson’s War, which shows the feats that intelligence agencies can accomplish when well-directed. Bethlehem is most like Breach, which showed the immense damage an individual spy can do. But instead of showing the effects the act of spying had, with the human characters secondary, Bethlehem tracks specifically the complex relationship that develops between handler and asset.

The film revolves around two people. First, Sanfur (Shadi Mar’i), a 17-year-old Palestinian from Bethlehem, who is the younger brother of Ibrahim (Hisham Suliman), a commander in Kataib Shuhada al-Aqsa (al-Aqsa Martyrs’ Brigades), the terrorist wing of FATAH, the main political party behind the Palestinian Authority (PA). Sanfur has been recruited as an informant for SHABAK, also known as the Shin Bet or the Israeli Security Agency (ISA), Israel’s internal security service—the equivalent of the British Security Service (MI5) or American FBI. The second person is Sanfur’s case officer, Razi (Tsahi Halevi).

To get this out of the way. Some detected a political message—specifically a pro-Israeli one. I really did not. The director, Yuval Adler, is a former member of Israeli military-intelligence. This is Adler’s first film, which he co-wrote with Ali Waked, a Palestinian Muslim reporter and activist. The film they made was a thriller and a spy film. It cannot avoid politics wholly, of course. But the sense of balance one would expect from such a writing team is maintained throughout. The accusation that the occupation and its discomforts went unmentioned is untrue: the film, for example, includes sections dealing with issues of checkpoints and home demolitions, two messy moral and military points of everyday friction that could easily have been avoided if the point was to portray the Israelis as snow white.

It is also deeply unfair to suggest that the film uniformly portrays Palestinians in a two-dimensional way. The whole attraction of the film is exactly that it doesn’t portray a simple picture surrounding the motivations of the Palestinian actors, least of all Sanfur. It shows that their conflict is not just with the Israelis but within their own communities, and that it is multidimensional.

For the Palestinian armed groups in the film there are social and class divisions, simple factional and turf disputes, political-religious disagreements, rivalries over money and family and personal vengeance—and that is just at the ground level and within organizations. There is then above this the contest between the PA and HAMAS, their mixture of motives, cynical and (by their own lights) virtuous, with overt roles and hidden hands prompting men to do things for purposes they don’t quite understand.

While all of this undoubtedly touches politics and elements of the conflict, what it really does is thickens the plot to give a realistic view of spy-craft at the ground level, where the question of who is doing what for whom and why is so often frustratingly unclear—even to the people involved, who can switch sides in their mind without having to alter much in the real world. (A classic case is Evno Azeff, a senior official in the Socialist-Revolutionary Party, the major Left opposition political-terrorist group in pre-Soviet Russia, who was simultaneously an asset of the secret police, the Okhranka.)

Though the Sanfur-Razi relationship occupies most of the screen time, the film does cover their interwoven familial, work-place, and other relations, not least to show the difficulty involved in maintaining a life undercover. There is an intense action sequence and the script is rather daring. It’s an intricate and attention-demanding film, not just because it’s in Hebrew and Arabic. There’s a lot more to say but I’ll leave it there and avoid giving anything away because you really should watch it.