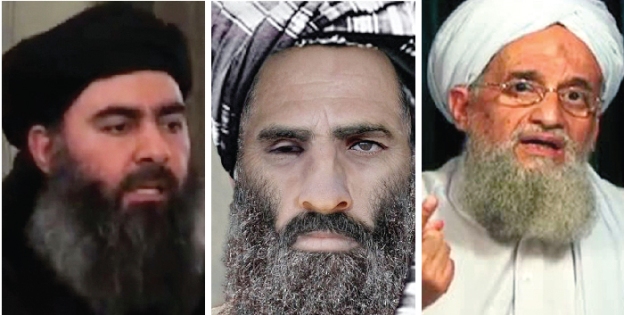 The Taliban on August 31 finally confessed all: its leader, Mullah Muhammad Omar, had been dead since April 23, 2013. The Taliban admitted that Mullah Omar had passed from this veil of tears on July 30 but was distinctly vague on when. Omar’s death was kept secret because of “jihadi considerations,” namely the “testing” time the mujahideen were having with the “foreign invaders,” the Taliban says. While the Taliban places the emphasis on its struggle with NATO, the reality is that NATO is drawing down and the Taliban’s burgeoning foe is the Islamic State (I.S.). The Taliban is tied to al-Qaeda’s faltering brand, and conditions are militating to help I.S., not al-Qaeda, in “Khorasan”.

Mullah Omar’s death would have been advantageous enough for I.S.. The bayas (oaths of allegiance) sworn to Omar expired with him, so groups with significant pro-I.S. contingents would now have to fight to give baya to Omar’s successor, rather than relying on the weight of legacy. As long ago as last December, Western intelligence sources noted that I.S. was “mentioned widely and with respect in intercepted conversations among … al-Qaeda’s residual elements in the region. Even among the Taliban there are some that might be willing to pledge to ISIS, or have done so already in secret”.

I.S.’s advantage is reinforced by the “Weekend at Bernie’s” routine. I.S. disseminates a winner’s narrative—in contrast to al-Qaeda which said Muslims should gather around it as a vanguard because “the Muslims” were so weak—and contends that jihadi factions that deny the legitimacy of its Caliphate do so out of petty ambition because they wish to be the restorers of the Caliphate. The façade maintained by the Taliban over Omar’s death means either that senior Talibs were out of contact with Omar—and I.S. has “hammered the theme that Omar is an absentee leader“—or were complicit in the mendacity. And that means either the Taliban is so weak, and perhaps so heavily controlled by a foreign intelligence agency (the Pakistani ISI), that it cannot even keep track of its leader or is so wedded to its power, in I.S.’s telling at the expense of the wider holy cause, that it will lie—a near-perfect ratification for I.S..

For al-Qaeda, Mullah Omar’s death causes considerable trouble. When, last summer, al-Qaeda went to all the trouble of digging up a pre-9/11 video in which Osama bin Laden gives baya to Mullah Omar as emir al-mumineen (commander of the faithful), followed a week later by Ayman az-Zawahiri renewing his baya to Omar, this was al-Qaeda’s response to I.S.’s ideological challenge: to set Mullah Omar up as the “counter-caliph” and say—never quite explicitly—that, since Omar got there first, al-Baghdadi’s claim to be “caliph” is illegitimate. It is now clear that Zawahiri made his pledge to, and based his strategy on, a dead man.

The Taliban’s statement yesterday was intended partly to introduce Mansour. The statements from Jalaluddin Haqqani, whose son Sirajuddin is the formal head of the Haqqani Network and one of Mansour’s top two deputies, and Mullah Adbul Zakir in support of Mansour show how hard the Taliban is pushing to legitimate its new emir. But there are problems. First came the (unconfirmed) report that Jalaluddin had been dead since December 2014, and then Muhammad Tayyab Agha, who leads the Taliban’s Political Office, quit in protest at Mansour’s appointment.

These statements of support were not without importance, however. Sirajuddin’s appointment showed that the Taliban remains committed to al-Qaeda, and opposed to the conditions for entering peace talks with the government. The analysts who saw a move toward reconciliation based this on the (correct) reading that Sirajuddin is close to Pakistani intelligence, but the second part of the supposition—that as NATO draws down the ISI will want to negotiate with Kabul—doesn’t stand up to scrutiny. Pakistan’s ISI planned Taliban offensives while NATO was in the country; ISI is not going to adopt negotiation once NATO protection is removed from the Afghan government.

In January 2015, I.S. formally expanded into the Afghanistan-Pakistan area, accepting the bayas given days earlier by Shaykh Abu Omar Maqbool and Hafiz Saeed Khan, two Pakistani Taliban leaders. Khan was appointed emir of I.S.’s “Khorasan Province,” though there is a report that he is dead. Two other men, Abdul Rauf and Abdul Rahim Muslim Dost, both previously imprisoned in Guantanamo for fighting with the Taliban, have switched allegiance to I.S., and several smaller Pakistani Taliban factions had earlier pledged to I.S. (though one would recant). Just last month, the leader of the Islamic Movement of Uzbekistan apparently announced his group’s defection to I.S. from al-Qaeda.

Concurrent with I.S.’s rise in Afghanistan has been an increase in Iran’s influence, which is being partly assisted by the United States as part of the broader détente with Iran in the wake of the nuclear deal, which imagines that Iranian power can be a stabilizing force. This is a tragic mistake.

Iran has recently stepped up its support to the Taliban and—incredibly—sold this as an anti-I.S. measure, despite Iran having armed the Taliban since before their regime was overthrown in 2001 and having armed and paid for numerous Sunni jihadists who kill Coalition forces in Afghanistan, notably Gulbuddin Hekmatyar, who is, if not an agent of Iran’s Islamic Revolutionary Guard Corp (IRGC), then an agent of influence. (Hekmatyar’s “Hizb-i-Islami Gulbuddin” is, with the Taliban and the Haqqani, one of the three main insurgent forces fighting NATO and constitutional government in Afghanistan.)

Iran’s support for Hekmatyar and the Taliban and Tehran’s distribution of cash among the Hazara Shi’ites and Afghan political elite are its main levers of power in Afghanistan for now. But Iran’s presence is helping exacerbate sectarian faultlines, as it does in the Fertile Crescent. I.S. has already begun trying to foment sectarian war in Afghanistan with attacks on the Hazaras. A strong I.S. in Afghanistan would give Iran the chance to advance its long-standing hegemonic ambitions for weak, decentralized neighbours under the banner of the anti-I.S. war. Iran does not have the power to pacify all of Afghanistan but “managed chaos” would allow Iran to play its protector-of-the-minorities card and cultivate reliance on the IRGC from official institutions. Syria and Iraq would be roughly the models, where Iran controls “useful” chunks.

In Iraq, the West abandoned the country and Iran filled the void. Iran’s power did not bring stability in Iraq; instead I.S. symbiotically rose as Iran ascended to dominance. Now U.S. forces are back in Iraq on worse terms than if they had just stayed to contain I.S. and Iran. The same will be true in Afghanistan—and indeed this has already happened in Afghanistan once, when the West left after the Soviets were out and then had to move back in after 9/11. Perhaps the West will get the message after the third time.