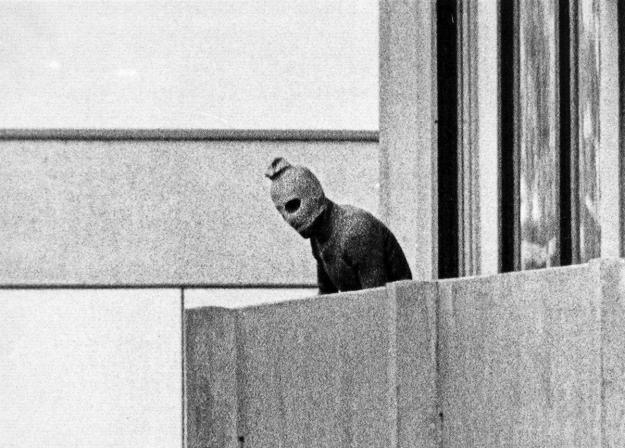 A Black September terrorist appears on the balcony in the Olympic Village in Munich, September 1972 (photo via AP)

The Black September group was formed in September 1971, ostensibly as a splinter from the Palestine Liberation Organization (PLO), but in reality the PLO retained control of Black September and used it to carry out terrorist operations that raised the Palestinian organisations’ profile, without staining the PLO with these atrocities.

THE STRUCTURE OF BLACK SEPTEMBER

The Black September name came from the moniker given to the events of September 1970, when the FATAH/PLO forces tried to expand their state-within-a-state in Jordan by launching a war against the Jordanian monarchy. The PLO, despite support from the Syrian regime of Hafez al-Assad, was defeated, and the PLO expelled from Jordan. (King Hussein of Jordan had asked for Israeli support at one point, though it proved unnecessary.)

Black September was announced with the mission to take revenge against Jordan, and indeed its first act was the assassination of Jordan’s Prime Minister, Wasfi Tell, in a hotel room in Cairo on November 28, 1971. The scope of Black September’s activities rapidly expanded.

For the PLO, Black September was to revive the Palestinian issue after the reversal in Jordan, bringing attention to “the cause”, while not politically implicating the PLO in a campaign of global terrorism, and giving the PLO plausible deniability in Lebanon, to which it had relocated, where the government was not keen to be seen as hosting terrorists.

MUNICH AND THE WRATH OF GOD

Black September’s most infamous atrocity is the murder of eleven Israeli athletes at the Munich Olympics on September 5, 1972. One athlete was shot and left to die; another was castrated and died from his injuries; and the other nine hostages were subjected to a twenty-hour ordeal of beatings and torture, before being murdered during the rescue attempt.

Mohammad Daoud Oudeh (Abu Dawud), another PLO operative who was involved with Black September from its founding, is usually “credited” as the mastermind of the Munich massacre, not least because he claimed to be; the Israelis believed it was Salameh. Oudeh recorded that Salameh’s role was symbolic; the reality was that he, Khalaf, and Mahmoud Abbas (Abu Mazen), the current PLO/Palestinian Authority leader, ran Black September and were responsible for Munich. Arafat at one point said that Hani al-Hassan, a senior FATAH operative then posted to West Germany, was behind the attack, though did not specify in what capacity.[1]

The Israeli response to Munich is known as Operation WRATH OF GOD. The Israeli Institute for Intelligence and Special Operations (MOSSAD) began with a series of assassinations in Europe against Black September operatives, some of whom were official representatives of the PLO:

Israel had feared the global condemnation for the Beirut raid, though judged it worthwhile trade-off to eliminate such important adversaries. The PLO/Black September rather blunted whatever outrage there might have been in the West, especially at an official level, by murdering Cleo Noel, the American ambassador to Sudan, and two other Westerners in Khartoum on March 1, 1973.

The WRATH OF GOD operation largely wrapped-up after July 1975, when Israel accidentally killed a Moroccan waiter, Ahmed Bouchikhi, in Lillehammer, Norway, after mistaking him for Salameh.

The hunt for the Munich criminals never did end, though. In January 1979, the Israelis finally caught up with Salameh and killed him with a bomb under his car in Beirut. An interesting discovery in later years was that Salameh had been the PLO point-of-contact with the U.S. Embassy in Lebanon and with the CIA.

Khalaf was killed in January 1991 at the PLO’s Tunisian headquarters, along with two of his most trusted aides: Fakhri al-Umari (Abu Muhammad), Khalaf’s head of security and a man deeply involved in the Munich conspiracy, and Hael Abdel Hamid, a senior PLO official. Khalaf had been hosting refugees from Sabri al-Banna (Abu Nidal), the for-hire terrorist based at that time in Muammar el-Qaddafi’s Libya. A number of intelligence agencies, including the CIA, had been running an operation to convince al-Banna his ranks were filled with spies and have him destroy his own organisation, which he largely did. Al-Banna remained capable of espionage work, however, and it was one of his agents, Hamza Abu Zaid, who cut down Khalaf and his officials in Tunis. Whether al-Banna orchestrated Khalaf’s killing on his own account, or at the behest of Saddam Hussein, one of al-Banna’s many patrons down the years, is unclear. The date—January 14, just as Operation DESERT STORM began to get Saddam out of Kuwait—is suggestive.

[1] UPDATE: Al-Hassan’s purported involvement points to an under-examined aspect of the Munich slaughter: the detectable hand of the KGB. For example, Arafat made his claim about Hani al-Hassan’s role in the Munich massacre in October 1972, a month after it occurred, in Bucharest, at that time under Soviet domination and ruled locally by Nicolae Ceausescu.

Al-Hassan was an “asset” of the Soviet Union’s intelligence services and he was shadowed by a formal KGB agent, Rafat Abu Auon (GIDAR).

Meanwhile, Salah Khalaf was responsible for the PLO’s “operational and intelligence cooperation” with the KGB, and Khalaf had a warm relationship with Soviet intelligence. Most intriguingly: Mohammad Oudeh says he was told by Khalaf that Mahmoud Abbas would secure the funding for the Munich atrocity. Abbas was a KGB agent.