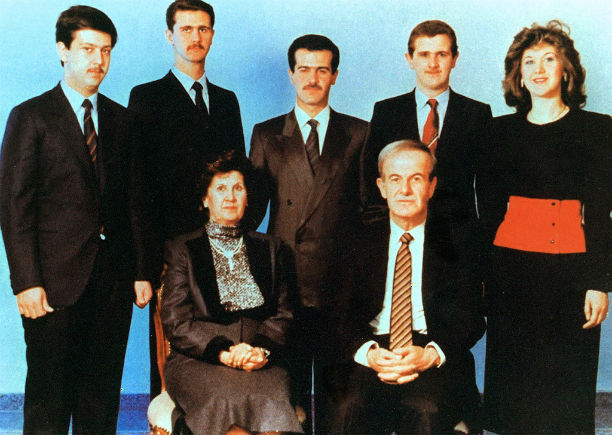 A grisly brood: The Assad family

Last Thursday, in Akrama, an Alawi section of Homs City, there was the most extraordinary scene: Alawite anti-Assad protests. A twin bombing at a local school—reported as a suicide bombing by the regime, though there is no evidence for this—had massacred fifty Alawi civilians, most of them pupils. Annexing the slogans of the revolution, the Alawis took to the streets to demand the removal of Homs Governor Talal al-Barazi. “The people want to topple the governor,” people shouted, a conscious echo of the “Arab Spring” chant, a-shab yurid izkat an-nizam (the people want to topple the regime). Some held signs denouncing the “silence” over the killings. Alawis were prepared to be filmed by a pro-regime channel denouncing the ruling class as exploitative of the people, condemning the security forces, and complaining that State television wasn’t showing any of this.

A story from the day before relayed the condition of Dummar, an Alawi enclave of the capital near Mount Qassioun, northwest of Damascus, a seat of the regime’s power, home to Praetorian Divisions like Republican Guard Brigade 104 and the Fourth Division. The regime has built for itself theme parks at vast expense while most of the country is destroyed and in grinding poverty, and the regime militias, the “popular committees” and the majority-Alawite National Defence Forces (NDF), rob the Alawis at will. “The grave for us and the palaces for them,” as one among the Alawi poor put it, referring to the regime.

It is important to note that these expressions do not name Bashar al-Assad. Lisa Wedeen, in her anatomy of the cult of Hafiz al-Assad, noted that there was space in the House of Assad’s official discourse for criticism of the regime, the Ba’ath, and even some politicians, but:

“Crucially, [there is a] distinction between ‘official power’ and Asad, which usually serves to distance Asad from the corruption and exploitation that critics document“. (P. 111.)

This sets up a contradiction, of course:

“[O]fficial rhetoric claims Asad to be omnipotent and omniscient, but … Asad is not supposed to be responsible for any of Syria’s problems.” (P. 128)

But when did a cult ever rely on logic? As Ms. Wedeen goes on to explain, part of the Assad regime’s power is that it can get people to act and speak “as if” the absurd claims of its propaganda are true. And nothing in Homs or Dummar has breached this code. When the Iraqi people rose up against Saddam Hussein in March 1991, survivors spoke of hajiz al-khawf inkiser (the barrier of fear was broken). This was true of the Syrian uprising too, but this has not taken root among the Alawis.

Nearer to a breach of official codes was the moment in late 2012, at a time when it was believed 10,000 Alawis had been killed fighting for the regime, when an Alawi woman who had lost three sons in the regime’s forces asked rhetorically in the presence of a foreign journalist: “Are you going to kill every one of us just so that one man may survive?” The Alawi death toll in this war has been high. This week there have been martyrdom posters put up in a town near Qardaha, the ancestral home of the Assad family in Latakia Province, showing many young Alawi men killed fighting for the regime. The toll might be higher still in relative terms.

The oft-given break-down of Syria’s demographics is:

But the 2004 census, the birth-rates of the various zones of the country, and other evidence tells a different story:

By implication, this leaves the Sunnis at 84%, split between Arabs and Kurds. A crude guess at Kurdish numbers—adding Hasaka plus Ras al-Ayn, Kobani/Ayn al-Arab, and Efrin—gives 8.5%, which would put Sunni Arab numbers at 75.5%. This explains why, as the sectarian war got going and Sunnis began defecting from the army, the regime had to be rescued by Iran flooding in (largely Iraqi) Shi’ite jihadists.

In May 2013, there were some reports of dissention among the Alawis in their heartland, related to Rifaat al-Assad, Bashar’s-father’s-brother, who led the regime’s killer brigades at Hama in 1982 and was then exiled in 1983 after an attempted coup:

“In recent weeks, these inter-Alawi disputes have been exacerbated as Rifaat … has sought to return to Qardaha for the burial of a family member. Those loyal to Rifaat have joined other prominent Alawi families in the city in challenging Assad’s leadership and joining in anti-regime protests. Although these demonstrations did not call for Assad’s downfall, the regime refused to tolerate open opposition from some of the most important Alawi families. In order to set an example, government forces reportedly burned their stores and arrested members of the family.”

There were similar protests, for similar reasons, in 1999, but they too were repressed. The furthest Alawis have gone is to want the removal of the dictator personally, but they want the regime kept intact and for Assad to be replaced by somebody more vicious who can martial enough violence to put down the rebellion.

Assad’s sectarian regime used sectarianism from the outset to try to provoke an in-kind backlash, which could be used to position his regime as the protector of the Alawis, closing ranks in the community and giving Assad many more human shields to throw into the way of an enraged population. The regime deliberately empowered the Salafi-jihadists, and then allowed the holy warriors to kill Alawis and Druze “to convince these minorities to rally around the regime“. This is exactly the same strategy as the Islamic State has employed, especially in Iraq, provoking atrocities by Shi’ites against Sunni Arabs that can be used to aid recruitment. Sectarianism is so wonderfully self-enforcing once it gets going.

The strategy worked almost too well for Assad. In January, when the regime tried to show a reasonable face to the “international community,” as against its supposedly-takfiri enemies at the Geneva Two conference, it was boxed in. It ended with the regime looking quite insane:

As Aboud Dandachi has noted, however, the regime couldn’t do otherwise: Assad’s officials would be “lynched by the regime’s own supporters … if they … uttered so much as a compromising word”. A similar incident occurred before the fall of Homs in May. The regime had decided to try to buy some international goodwill by allowing the U.N. to take some food into the besieged rebel enclaves it had been starving out. But the regime militias on the ground, notably the NDF, defied the regime. The regime’s supporters had been incited into a frenzy about the Zio-Wahhabist conspiracy against Syria which intended the destruction of the minorities and they had its agents on the point of defeat with this terror-siege: why would they let up now? The U.N. was fired upon, and ultimately all of Homs City was conquered and the remaining Sunnis were emptied out.

Even the Alawis who disbelieve the official propaganda nonetheless believe that the regime has trapped them into a relationship of mutual dependency, and that the fall of the regime would mean their extermination. Thus, sceptics and the credulous alike among the Alawis favour the hardline policy. In Homs, for example, the cynics in the NDF were sending a clear message to Assad: you dragged us into this terrible war, it is our children dying for your defence, and you’ve endangered every one of us, so you do not get to play the nice dictator to the outside world; we can give you a PR black eye, which nonetheless keeps the State structure defending us (and you) in place.

Therefore, the short answer to the question I began with is “no,” or more precisely: if the Alawis—those with official pull and without—break with Assad personally, it will only be because they favour somebody even more ruthless. The Assad regime has very nearly succeeded in copying their fellow KGB-trained regime in Algeria and making this a binary choice between the dictatorship and the takfiris: if the Alawis were in no mood to break with the regime when the anti-Assadists’ most public spokesman offered olive branches to the minorities, they are certainly not going to be persuaded by those who crucify Christians. That this was the plan all along is a matter of indifference to the Alawis.

While nobody would deny the sectarian furies now at play in the Fertile Crescent, they must not be allowed to mask the larger picture, which is a “struggle for mastery,” as the late Fouad Ajami put it, a fight for regional order, and that is a contest between States, specifically an imperial push by Clerical Iran into the Arab world. Sectarianism has a role: Nouri al-Maliki made his call to support Bashar al-Assad solely on sectarian lines, for example, fearing that Sunni primacy in Syria might embolden the Iraqi Sunni Arabs he was busy witch-hunting out of the government. But States are the prime movers, and this is the reason why, as I have previously argued, Iran is a “much greater” threat than the Islamic State.

A focus on sectarianism blinds us to Iran’s support for al-Qaeda and the fact that Assad sent Salafi-jihadists into Iraq to murder our troops and is now posing as a counter-terrorism partner in solving a problem he is largely responsible for. Building up the takfiris was the regime’s way of discrediting the rebellion internally—frightening the minorities to cling to the regime and hiving off sections of the Sunni population who saw Assad as the lesser evil—and trying to draw in international help to put down the insurgency (a scheme that’s not going too badly.)

8 thoughts on “Will The Alawis Break With Assad?”