Aftermath of the Hama massacre, 1982

Hama. The very word in the Syrian lexicon denotes violence and the immovability of the House of Assad. There, in 1982, Hafez al-Assad secured the title deeds to his dynasty. Hafez had intruded into the Lebanon during its time of sorrow and the “blowback”—which it turns out is not only for Americans—had sparked an uprising inside Syria led by the Muslim Brotherhood. In June 1979, the insurgency escalated. In Aleppo, the Ikhwans captured 300 cadets and separated out the 282 Alawis. They then opened fire at close range and murdered 83. In March 1980, after a series of strikes and protests, the regime took terrible vengeance on Jisr a-Shughur and for a time the uprising seemed to pacify. Then in June 1980, Hafez was nearly assassinated. The next day, he murdered 1,000 Ikhwani prisoners in Tadmor: war had been declared for real. After a wave of bombings by the Ikhwans in the capital between August and November 1981, and a series of pitched battles, by January 1982 the Brotherhood had been pushed out of Aleppo and Idlib and holed up in Hama City. The army surrounded it and the order was given to shell it. A third of the Old City was destroyed and Amnesty International says between 10,000 and 25,000 people were killed in the three weeks of shelling; Rifaat al-Assad, Hafez’s brother and the leader of the forces that did the shelling, has boasted that 38,000 perished.

This time around it was Homs that took centre-stage; it would be the “capital of the revolution“. Hama—and Homs—had been dismissed as hotbeds of zealotry and sectarianism. Robin Fedden in his masterly Syria: An Historical Appreciation (1946) recorded these two cities as “stronghold[s] of Muslim fanaticism”. Of Hama he wrote: “[T]here can be few places outside the Holy Cities of Arabia where the Faith has remained so aggressive and fanatic.” Early in this uprising the most prominent Wahhabi preacher was Adnan al-Arour, a Saudi-based Hamawi who gave to the Assad regime an easy propaganda point with his anti-Alawi incitements: all protesters were dismissed as Araeer, a plural of the man’s name. And one video at the end of July, showing Hamawis throwing regime soldiers from a bridge into the Orontes, was widely circulated despite occurring at exactly the moment Hama was besieged and hundreds of civilians were being murdered by the regime.

Whatever Hama’s religio-political allegiances, at the beginning of this Christians were invited to take prayers in the Great Mosque, and even in the aftermath of the regime’s deliberately sectarian attacks—it had left the Alawi sections of the city alone—there was “absolutely no signs of fundamentalism inside the city.” The Ikhwans were irrelevant to this protest movement. The Syrian Brotherhood’s leader acknowledged as much. Hama Province is also home to one of the most unique towns in Syria: Salamiya, which is majority-Ismaili, and solidly anti-regime.

Both the opposition and the regime were haunted by the “phantoms of Hama“. It has taken until April 22, 2011, for the first major protests in Hama, and after a regime incursion to the edge of town on June 3 that killed more than 70 people, the regime evaporated, returning only on July 31 for a massive attack during Ramadan. Hama was temporarily brought to heel, like Deraa, but for Homs the effect of the violence was reversed until devastating attack at Baba Amro in February 2012.

By mid-March 2012, the Hama countryside was ablaze. Major Ali Mohammed Ayoub announced the formation of the Hama Military Council, having previously commanded the Hamza Battalion of the Khalid bin Walid Brigade—the latter being the major early formation that later evolved into Kataib al-Farouq, at one stage among the largest moderate groups in the country. The rebel units in Hama City were separate from those in Rif Hama, and while in the countryside FSA-type brigades like Suqour al-Ghab had the lead, in the city moderates like the Salah ad-Din Brigade had to contend with Wahhabi groups like Ahrar a-Sham.

Demographic Map of Syria. Note particularly the concentration of Alawis on the coast.

Throughout the summer of 2012, the regime concentrated a campaign of ethnic cleansing of Sunnis on Hama. It had either cleared or humbled the Sunnis in the Alawi provinces of Latakia and Tartus on the coast—including using the Navy to shell Palestinian Sunni Arab camps, which led to the “disappearance” of 5,000 Palestinians—and had then set about creating a buffer zone from chunks of Homs and Hama. A series of massacres by Alawi villagers against Sunni civilians in Houla, Qubair, Tremseh, and Haswiya instilled terror in the Sunnis, cleared some out, ignited a sectarian war, and ensured that the fate of the Alawis was tied to the fortunes of the House of Assad. The areas of this proto-Alawi State that were part of the Hama governorate were some of the most defended: it did not matter how many checkpoints the rebellion took out, they were always back the next day.

A rough map of the “Alawi State” being carved out by the regime from the summer of 2012. The yellow shows the Alawi-majority provinces; the blue the rough buffer zone in Idlib, Hama, and Homs; and the red the security corridor used by the regime to get its most loyal Alawi supporters from the coast to defend the capital. It seems doubtful they ever intended for this “Plan B” as a reality—a retreat from Damascus to the coast—but it helped polarise the minorities and kept a flow of fighters coming from Jibal Ansariya.

The news went quiet from Hama in 2013. In April, a rebel offensive flared up and was then crushed by June. By September 2013, there were signs that in the east of Hama Province the fanatics were gaining the upper hand: the Islamic State of Iraq and Syria (ISIS) overran a military base in eastern Rif Hama. But at roughly the same time in the north and west of Hama, the moderate rebellion seemed to be gaining ground—so much so that the regime resorted to Houla-style massacres in Kafr Zayta and Sheikh Hadid with “gun shots and edged objects“. There are many problems with the SOC but their statement on this was perfect, noting with acid contempt that the West could “be reassured this time the Assad regime did not use chemical weapons“. October saw a major eruption of rebel gains, many of them by FSA-identified forces, though Jabhat an-Nusra and Ahrar a-Sham were involved. Fighting raged through to mid-November but the strategic areas of Hama were lost by the insurgency in late October when the regime recaptured them on its way to an assault on as-Safira in Aleppo, ostensibly fulfilling its obligations to reclaim control of chemical weapons facility so it could surrender the weapons to the “international community”. By late November, Kafr Zayta was being hit with “barrel bombs”.

The next news really was after the January 3 anti-ISIS revolt this year, when ISIS was pushed out of Kafr Zayta and left a mass-grave behind them. Concentrated around the city, Hama was one of five main provinces—with Idlib, Aleppo, Raqqa, and Deir Ezzor—that rose up against ISIS. By all accounts the Syrian Revolutionaries’ Front, one of the last best hopes of this rebellion, has gained ground in Hama, especially the northern plains spilling into Idlib, with groups like Mohammed Zaatar’s Dhiab al-Ghab (Wolves of the Ghab) taking salience. (The Wolves did have, and may still, some Ikhwani links.) It was reported on March 23 that a rebel offensive was intensifying in north-west Hama around Khan Shaykhun, which is actually administratively part of the Idlib Province, and Morek, having been going on for weeks. Morek fell to the insurgency last November and in February the Islamic Front—Suqour a-Sham and Jaysh al-Islam most notably—put out a video on their intention to liberate Khan Shaykhun. In the last few days, social media evidence suggested there was heavy clashes around Khan Shaykhun (1/2), Morek, and Kafr Zayta (1/2). 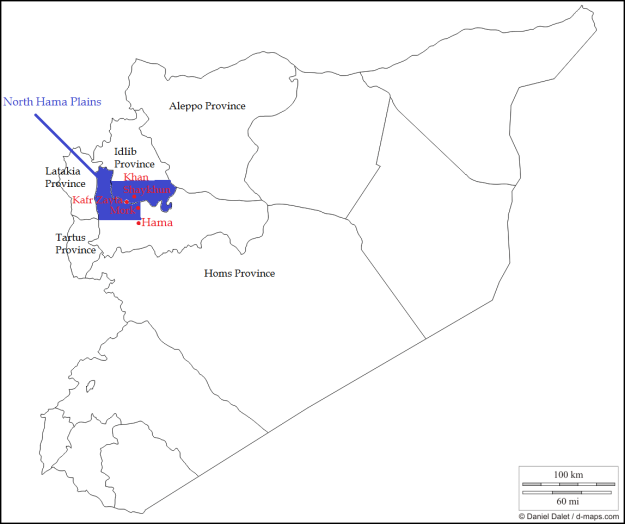 Rough map of the area of Hama currently experiencing the heaviest fighting. It is concentrated on the North Hama Plains that spill into Idlib Province and on the three labelled urban centres, excluding Hama City.

The intention in writing this was to look at one of the dogs that was not barking yet where some mildly positive progress was taking place, but just as I was finishing reports came in that Kafr Zayta had been hit with a chemical weapons attack. If that proves true—and the videos suggest it might—then it will at least hopefully give the lie to my headline: the focus should be very firmly on Hama, especially if the death toll is as high as one-hundred. President Obama will be in a difficult position indeed: determined not to offend the Damascus regime so it keeps co-operating with a chemical weapons deal it has defied at every stage, there is actually now some evidence of better co-operation; but what price if the regime is going to go on using the 45% of its stockpile remaining to it to attack civilians? The promise of this “deal” was that while the carnage would continue with conventional means—whatever the protestations that this was “not a licence to kill with conventional weapons“—the Syrians would at least be spared attacks using weapons of mass destruction. If that now transpires not to be true then the very last rag of defensibility falls away from this Kremlin-orchestrated scheme. The bigger question is whether Obama will acknowledge that this has happened and act on it.

10 thoughts on “Hama: The Forgotten Front”