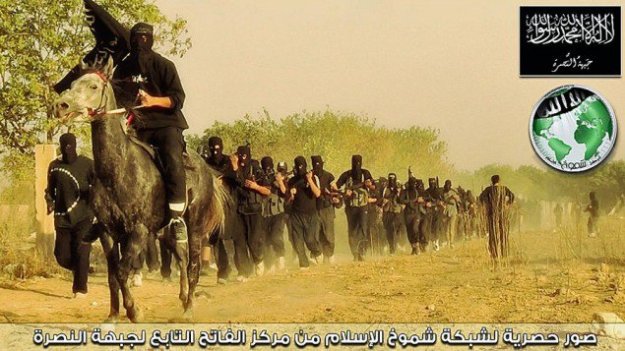 On 10 April 2013, Jabhat al-Nusra’s leader, Abu Muhammad al-Jolani, put out a speech, published by al-Manara al-Bayda, entitled, “About the Fields of Syria”. In the speech, al-Jolani rejected the statement from thirty-six hours earlier by Abu Bakr al-Baghdadi, which revealed officially that al-Nusra was a front-organization for the Islamic State of Iraq (ISI), and then al-Baghdadi asserted his authority publicly over al-Nusra, dissolving ISI and al-Nusra into a new group, the Islamic State of Iraq and Syria (ISIS). This dispute would ultimately lead to ISIS being expelled from al-Qaeda’s network after it refused the orders of al-Qaeda’s leadership to return to Iraq and leave al-Nusra as al-Qaeda’s branch in Syria. A translation of this speech by jihadology.net is reproduced below with some minor editions for clarity and some interesting sections highlighted in bold.

Muslims everywhere, leaderships of the jihadi movements and leaderships of the armed factions, people of al-Sham [Syria], sons of Jabhat al-Nusra [The Front for Support], as-salamu alaykum wa rahmatullahi wa barakatuh [may peace, mercy, and the blessings of God be upon you].

The Truth of the Almighty: “Alif, Lam, Meem. Do men think that they will be left at ease because to say, ‘We believe,’ and they will not be tested? We certainly tested those before them, so God will certainly know those who are sincere, and those who are liars” [Al-Ankabut: 1-3].

We inform you that the leadership of the Front and its majlis al-shura [consultation council] and the humble slave [to God], the general commander of Jabhat al-Nusra, have no knowledge of this deceleration, except what they heard from the media. So, if the attributed speech was accurate we weren’t consulted.

I say, seeking aid from God: After some of the evidence was uncovered that we accompanied the jihad in Iraq from its beginning until our return after the Syrian revolution with what occurred to us from predestined abruption. But we are familiar with the details of most of the momentous events that occurred on the journey of jihad in Iraq, and concluded from our experience there what pleases the hearts of the believers in Syria under the banner of Jabhat al-Nusra.

God Almighty knows that we only saw from our brothers in Iraq the great goodness of generosity and shelter, and their virtues cannot be counted. It is a debt that cannot leave our necks as long as we live.

I never wished to leave Iraq before seeing the banners of Islam raised high over Mesopotamia, but the rapidity of the events in Syria prevented us from that. I was honoured to accompany many of the righteous people from Iraq, whom we reckon to be so. Many of them have left us, but not one of them is mentioned before me without me saying, “may God accept him”. Tens and even hundreds of muhajirun [foreign fighters] from Syria and others were sacrificed to declare the Word of God under the banner of the State of Iraq.

Then, God Almighty gave me the honour of knowing Shaykh al-Baghdadi, that honourable shaykh who gave the people of Syria their right and paid the debt doubly and agreed to the project which we proposed to him to support our oppressed people on the land of Syria. Then he aided us with the money of the State, despite of the hard days that they were passing through, then he kept all his trust in this poor slave and authorized him to set the policy and plan and aided us with some brothers, despite of their scarcity. But God Almighty blessed them and their gathering and the Front began to engage the hardships step-by-step until God graced us and the banner of the Front was raised high, and the hearts of the Muslims and oppressed flapped with it. The Front became the hard number that counterpoise the battle of the umma [Muslim community] today on this land, and the focus of the hopes of the Muslims of the whole world.

We have from the beginning said that we aspire to return to the governance of God on His land, reviving the umma to implement His shari’a and spread His manhaj [methodology]. We didn’t want to be hasten in implementing these matters; we were patient regarding it, since the functions of the state—from implementing the shari’a to ending rivalries and conflicts to seeking to establish security among Muslims and securing their needs—is being done in the liberated areas despite the delinquency.

The issue of the declaration wasn’t of concern in the presence of the essence the State of Islam in the land of Syria, being built by the arms of all without exclusion of any major party who participated with us in jihad and fighting in Syria from the mujahid factions and the respected shaykhs of ahl al-sunna [the Sunnis] and our brothers, the muhajirun, as well as not excluding the leadership of Jabhat al-Nusra and its majlis al-shura.

The issue of postponing the declaration [of subordination to the Islamic State of Iraq] was not related to softness in religion or inanition [exhaustion] that occurred to the men of the Front. Rather, it is wisdom based shari’a principles and a long history and spending effort in understanding the shari’a policy that is appropriate for the Syrian reality, which ahl al-hall wal-aqd[1] have agreed upon in Syria from the leadership of the Front and their students of knowledge who supports us from the honourable shaykhs and people of opinion and consultancy abroad.[2]

I’m responding to the appeal of Shaykh al-Baghdadi (may God preserve him) of upgrading from lowest to highest, and say that this is a bay’a [pledge of allegiance] from the sons of Jabhat al-Nusra and its general commander: we renew it to the shaykh of jihad, Shaykh Ayman al-Zawahiri (may God preserve him). We give bay’a to listen and obey in what is liked and in what is disliked, and to hijra and jihad, and not to fight against the people of authority, except upon the appearance of kufr [unbelief]. The banner of the Front will remain as it is without any change, despite our appreciation for the banner of the State and who carries it and who has sacrificed his blood and that of our brothers under its banner.[3]

We reassure our people in Syria that what you saw from the Front—defending your religion, honour, and blood, and its good character with you and the fighting groups—will remain as you knew it, and the declaration of the bay’a won’t change anything in its policy.[4]

O God, unite our word and guidance. Amin, Amin, al-hamdu li-lahi rabbi’l-amin [All praise to God, Lord of the Worlds].

The Servant of the Muslims, the General Commander of Jabhat al-Nusra,

[1] Literally, “The people who loose and bind,” it refers to those who are influential in religion and society.

[2] Al-Jolani’s rough meaning is: Jabhat al-Nusra charted a different path to that which ISI(S) is demanding, which involved going slower in implementing the shari’a and hiding al-Nusra’s relationship with ISI and ultimately al-Qaeda.

[3] Phrased very respectfully, al-Jolani nonetheless firmly rejects al-Baghdadi’s order to disband and subsume al-Nusra under ISI’s direct control, and the bay’a to al-Zawahiri—phrased as a renewal—is the first public confirmation that al-Nusra is loyal to al-Qaeda. Whether or not al-Nusra was connected directly to al-Qaeda before this, or had such interactions mediated by ISI, al-Jolani pulled in a mediator he could be sure would side with him.

[4] This reassurance to insurgents and the Syrian population is borne of what al-Jolani delicately touched on above: the reason al-Nusra hid the fact it was ISI’s Syrian wing was because ISI had brought discredit on itself and al-Qaeda’s brand by its appalling tactics of mass-murder and video butchery in Iraq. Al-Nusra wanted to wind itself into the Syrian revolution and Syrian society on its own terms, offering itself as an effective fighting force against the Assad regime and an effective governor of areas, without having the suspicion of public ISI/al-Qaeda links, which it could later reveal—theoretically redeeming them.