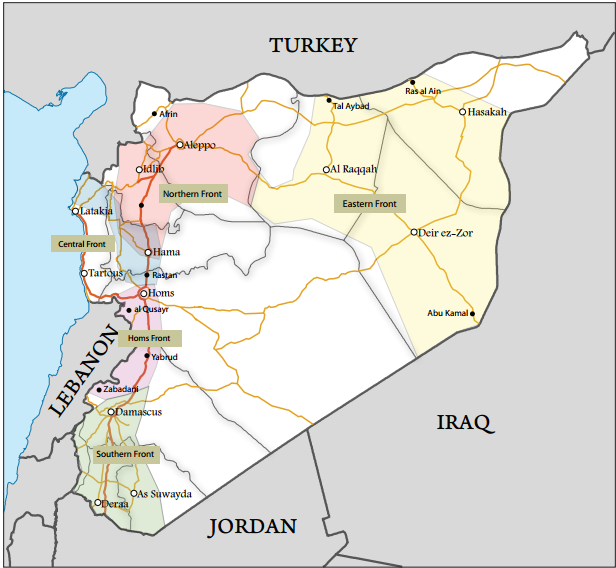 A map of the Five Fronts command, an early effort at rebel unification that split the country into five strategic zones. The Sahel or Coast Front is also called the Central Front

On March 21, a major offensive began by anti-regime forces in the north of Latakia, an area where the regime has long been unable to re-fasten its rule. Dubbed “Operation al-Anfal,” it was spearheaded by Jabhat an-Nusra and Ahrar a-Sham. (In the very month of the 26th anniversary of Halabja, this is another reminder why the Syrian Kurds have been so aloof from this rebellion.) Among those killed in the initial hours of this was Sanafi an-Nasr (Abdul Mohsin Abdullah Ibrahim as-Sharikh), the leader of al-Qaeda’s “Victory Committee”.

On March 23, the town of Kessab, about 35 miles north of Latakia City and the final border-crossing with Turkey in regime hands, fell. A largely Armenian Christian town—having been there since the massacres of 1915 that drove them from their homes on death marches that ended in Deir Ezzor—the inhabitants were not enthused by these developments, seeing echoes of the exterminationist effort against them by the Turks. Hilal al-Assad, a cousin of the dictator’s, a rapist and a killer, was struck down in Kessab as it was falling.

On the same day, probably the most serious cross-border escalation for some time occurred when Turkish missile defence batteries shot down a Syrian fighter jet. It has also now been shown that Turkish Prime Minister Recep Tayyip had mused on the idea of orchestrating a casus belli with his dangerous head of intelligence Hakan Fidan and Foreign Minister Ahmet Davutoglu to allow him to finish with Bashar al-Assad’s regime entirely. Before the day closed out another veteran al-Qaeda member, Abu Hamam as-Suri had turned up to support Nusra and condemn the Islamic State of Iraq and Syria (ISIS).

On March 24, two more members of the extended Assad clan, Ali and Kifah, were killed, reportedly by shellfire, and Ahrar a-Sham pushed into Qastal Maafa on the Mediterranean coast, giving the insurgency access to the sea for the first time. The regime’s position in another town, Samra, collapsed. On March 26, the regime began with fighter jet attacks on the insurgent-held zones. And yesterday, it was reported that the insurgents had repelled a regime attack on the areas they now hold in northern Latakia.

The symbolism of this is hard to overstate, bringing the war to the Alawi heartland. There were, of course, Alawis who opposed the dictatorship. There was a lot of reporting in autumn 2012 of great dissention in Jibal Ansariya and rage that 10,000 Alawis had been killed fighting for the regime. “Are you going to kill every one of us just so that one man may survive?” asked one Alawi villager, referring to Bashar al-Assad. But in this killing season that community has closed ranks. The regime implicated them in its sectarian crimes against the Sunnis, and “has ensured that the existential Alawi fears are valid“: they will now stand or fall with the political fortunes of the House of Assad.

The implicit bargain is that while the Alawis will do the regime’s fighting for it, the regime has to defend them in the Alawi Mountain: they will send their young men to fight in Damascus and Homs so there is not bloodshed in Latakia and Tartus. The regime essentially accepts that bargain but has taken steps to ensure there are not cracks in Alawi ranks; it had been happy for “killing by [the Salafi-jihadists] of Alawis and Druze in order to use that to convince these minorities to rally around the regime,” and last August it got its wish in the most public and gruesome manner. ISIS, Nusra, Ahrar a-Sham, Jaysh al-Muhajireen wa-Ansar (Abu Omar a-Shishani’s mostly Chechen group, not yet fully merged with ISIS), and Suqour al-Izz (an ISIS proxy group) struck into Rif Latakia in “Operation Liberation of the Coast” and massacred 190 Alawi civilians—57 women, 18 children, and 14 elderly men—and seized more than 200 hostages, which they still have to this day. One of the insurgents explained that the offensive was meant to “hurt them like they are hurting us. The Alawites have been huddling in their mountain thinking that they can destroy Syria and remain immune.” One need not be a sectarian to see what he meant.

Map of the areas of control by various armed actors on the ground inside Syria. Circled zone the area of insurgent-held territory in Latakia.

From the very start of this the rebellion, in places as conservative as Hama, the opposition held out an olive branch to the minorities who were the most sullied by collusion with the dictatorship—the Alawis had been brought down from their impoverished mountain to cities previously off-limits and a Christian middle class had done well by the regime—but as the sectarian polarisation was deliberately stoked by the regime and as the Salafists flooded in the mercy drained away. Sectarian lines have been very crudely drawn: by the lights of some Sunnis, the Alawis have sent their men to be the regime’s killer squads, and thus they are fair game; this is revenge pure and simple, a means of inflicting pain on those who have attacked the Sunnis for being Sunnis. 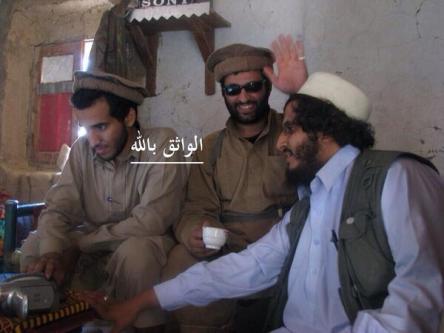 This picture surfaced soon after Sanafi an-Nasr was killed. He is shown on the far-left.

On a more strategic level, knowing that Assad has had some internal Alawite challenges, including a vague challenge from his uncle Rifaat who levelled Hama in 1982 and trouble trying to control the Shabiha (so much so that some reports say the regime itself killed Hilal al-Assad because of the damage he was doing to the regime among the Alawis), the insurgents know that the regime must throw everything it has into a fight for Latakia: it draws away resources, including fighter jets and helicopter gunships dropping barrel bombs, from other theatres. This is the best the insurgency can hope for, however.

The forces challenging the regime on the Sahel Front are the most radicalised in all of Syria: Even with the expulsion of ISIS, Nusra is al-Qaeda’s official franchise in the country and Ahrar a-Sham clearly has a pro-Qaeda wing and always was more ideological than the localised rebel groups who took up arms to defend themselves and fought on knowing that the only real defence was the demolition of the regime. For once regime propaganda about “Wahhabists” is not wholly inaccurate. The only way such forces can take over the Alawi zones is if one of the possible apocalyptic scenarios for how this ends comes true: the wholesale genocide of the Alawis, with those who are not killed fleeing in boats into the Mediterranean. 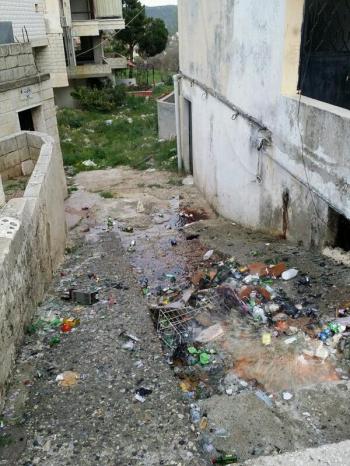 Taking away one of the only things that might help get people through it, Jabhat an-Nusra smashed all the bottles of alcohol in Kessab (March 23, 2014) 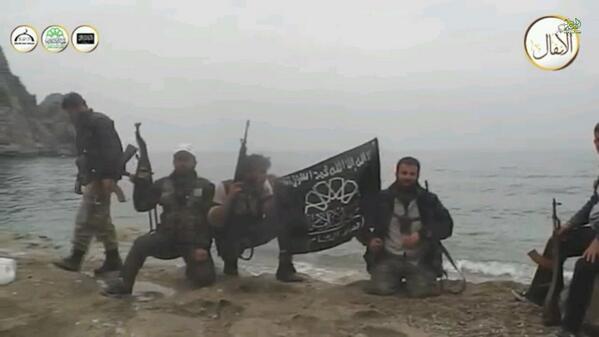 In short, this offensive by the insurgency is sure to be defeated: it is just a question of how much damage it can do the regime in the meantime, how much energy and resources the insurgents can sap from the regime by stretching it and bloodying it in its own homeland. The offensive shows a gain in strength for the Salafists within the insurgency, an especially unfortunate development given that the reportedly impending offensive on the Southern Front, supported by Western and allied governments, has been designed expressly not only weaken the regime—in preparation for negotiations—but to sideline the Qaedaists. While evidence has surfaced showing the rebellion in the south with some new anti-tank munitions, the Jordanians have reportedly vetoed the only things that could make a real difference to the balance of power, namely surface-to-air missiles (MANPADS). Indeed, concerns about refugee flows and other effects of this planned offensive mean it has somewhat run aground before it has even started.  With no serious effort by the West to help the moderates pull down the regime, the extremists are claiming that mantle and gaining ground while the fighting and the killing continues across innumerable fragmented fronts. In these conditions, this offensive into Latakia will be one more minor episode in what promises to be a very protracted and sanguinary conflict.

Update (April 12, 2014): An Institute for the Study of War report on April 9 suggests that the damage to the regime is quite considerable. The ongoing offensive on the Hama-Idlib provincial line is in part a reflection of the insurgency capitalising on the regime being thrown on the defensive in its heartland. It has relieved pressure on crucial re-supply areas to the rebellion in Aleppo and Qalamoun. Additionally, “These rebel offensives have demonstrated an improved concept of operations in which rebels are increasingly targeting previously uncontested regime strongholds”. This insurgency in northern Latakia cannot gain much in and of itself and cannot hold whatever it does gain—the regime would have to be dead for that and we are not even close to that yet—but it has been more helpful than might have been predicted in diverting the regime and opening space for more decent insurgent forces in the interior to take the initiative.

Update 2 (April 18, 2014): A row blew up after Kim Kardashian, among other “celebrities,” began agitating for the West to intervene against the insurgency in Kessab, claiming that the majority-Christian (specifically Armenian) population in that town was being subjected (again) to exterminationist attacks by Muslim extremists. As it transpired this was regime agitprop, not that there was a notable retraction from Ms. Kardashian—almost as if she neither knew nor cared much about Syria and Syrians to begin with.

6 thoughts on “The Sahel Front”